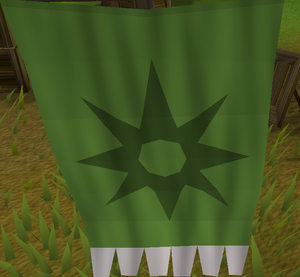 Gnomes are one of the most concentrated races in Gielinor, with the exception of humans. Not only do the gnomes have their own empire, but they also have their own foods, clothes, transportation, quests, and even semi-popular minigames called Gnome Ball and the Gnome Restaurant. The Gnome race is primarily located in Kandarin. 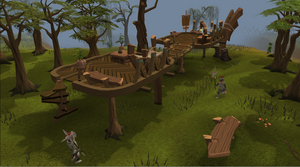 Gnomes are much like in real-world folklore. They appear as short men, women, and children, about two to three feet tall (about 0.6 to 1 meters). The gnomes are very human-like, and they often dress in green tunics and trousers, with red or green pointed hats. In many ways, they appear similar to dwarves, although unlike dwarves they rarely have facial hair and have pointed ears similar to the elves. They are related to humans, sharing a common ancestor.[1]

Gnomes are often regarded as more intelligent than most other races, and have a higher standard of living. Gnomes generally love nature, making their homes in treetops and living in heavily wooded forests. Despite their usually peaceful nature, gnomes are well-trained militarily, capable of overwhelming most armies through sheer numbers. They mount prehistoric terrorbirds and battle tortoises in conflict to make up for their small size. Using magic, they have unique illusionary, stealth, Guthixian, and spiritual magic using hybrid Elven/Gnome machinery or meditation to amplify it. Most Gnomes, even civilians, carry bows, and some carry metal weaponry in combat.

Gnomes are a highly diplomatic race, holding alliances with many other mortal races, both in and outside Kandarin. In many large cities and unexplored areas, gnome ambassadors, researchers, or explorers can often be found attempting to increase their knowledge of the world. Gnomes are unique culturally, they love cooking, music, animals and inventing new things. They are also infamous pranksters and are well known for their own sport, Gnome Ball. 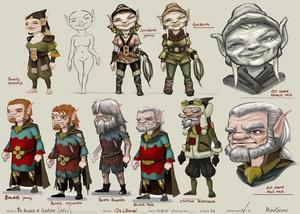 Gnomes are perhaps the most technologically advanced race, rivalled only by the elves and the dwarves. One of their most notable invention is the gnome glider, an aerial transport system used both in combat and peace. Also of note is the gnomecopter, a small one-man flying machine that used to give tours to free-to-play players. Other technological innovations include their ballistic military devices, their invention of the parachute, the spring cleaner, and their knowledge of elven crystal equipment.

The gnomes use tortoises and terrorbirds for almost all potential avenues. Both animals can be used for war purposes, though they also have civilian uses, such as mining for tortoises and delivery for terrorbirds.

Gnomes generally follow the god of balance, Guthix; gnomish mages generally use Claws of Guthix in combat, Hazelmere mentions his loyalty to Guthix, Hudo shouting "Great Guthix!" when showing him giant frog legs, Professor Arblenap commenting that the Dwarven Power Station is "not Guthix", Gnome children may recite a prayer to Guthix when spoken to, and the player mentions at one point that they thought Guthix created the gnomes and dwarves as the first races. Additionally, the Battle mages who are aligned with Guthix are gnomes. Guthix himself, in the God Letters, has expressed deep fondness for the Gnomes. And as shown in Armies of Gielinor, Gnomes fought for Guthix in the God Wars.

According to Saradomin, "As I understand it, the gnomes speak their own tongue, yet are also fluent in the common language used by humans within the world, allowing communication to be made between the races." Their own tongue is called Ancient Gnomish.

Gnomes have proven themselves to be fair combatants.

In the Second Age, gnomes dwelt on Gielinor with dwarves, elves and humans. They built great and powerful cities, and many technologies from that period cannot be reproduced today, even with all their wisdom and intelligence.

During the God Wars, gnomes did not fight in the wars, like the dwarves, they hid underground.

Unlike the dwarves however, the gnomes returned to the surface right at the beginning of the Fourth Age during the Great Migration to found their new city, the Tree Gnome Stronghold. This began with the planting of the Grand Tree, and many other settlements were created, such as the Tree Gnome Village. In the early-mid Fourth Age, gnomes had to fight over land with goblin tribes who were driven out from Feldip Hills by ogres and seeking a new place to settle. Eventually, with the help of Glouphrie's illusion tricks, they managed to scare goblins even further north.

The gnomes celebrated their victory, however Glouphrie would be banished from the Stronghold after covering up the death of the Spirit Tree Argento. Glouphrie and his supporters would travel south and found their own city, Arposandra.

The gnomes of the Tree Gnome Village would eventually be drawn into a war against General Khazard and his forces, after Glouphrie manipulated Bolrie into attacking Khazard's forces by claiming that he would pose a danger to gnomish lands. Khazard mobilised his forces for war against the gnomes, although they have had little success in breaching their defences. Bolrie soon realised he had been manipulated and his family was put to shame, but the remaining gnomes continued to fight off Khazard's forces to this day.

During year 169 of the Fifth Age, Glough hired a human to plant daconia rocks around the Grand Tree, causing it to be sick. The gnomes soon arrested the human and believed that the humans were planning to attack them, and prepared for war. However, another human soon discovered Glough's plot and undid the damage he created. The gnomes quickly stopped mobilising upon learning of his plot.

Additionally, the gnomish city of Arposandra is believed to be hidden beneath the Poison Wastes of Tirannwn. Those living in Arposandra hold contrasting views to Gnomes living elsewhere. Arposandra is currently in a state of war with the remaining Gnomish Empire.

The Gnomes have a very sophisticated sense of taste and so they make and eat gourmet foods and cocktails. With a bit of training, the player can also make Gnomish food and drinks. The ingredients for these foods can be purchased from Hudo, Heckel Funch, or looted from gnomes using the Thieving skill.

Gnome clothing such as gnome goggles and gnome scarves more can be found in the clothing store in the Grand Tree, which can be found on the Second floor, in Rometti's Fine Fashions, which is sold by Rometti.

The Gnomes have a few different types of transportation available to humans. One method is the Spirit Tree and another is the Gnome Glider, requiring the Tree Gnome Village and The Grand Tree quests, respectively. Both are for members only, though some can be found in non-member areas. For both methods of transportation the player must have completed a number of quests to fully take use of them. A much less commonly used method involves launching or squishing a Grand seed pod, a possible reward from the Gnome Restaurant activity.