From the RuneScape Wiki, the wiki for all things RuneScape
< Glorious Memories
Jump to navigation Jump to search 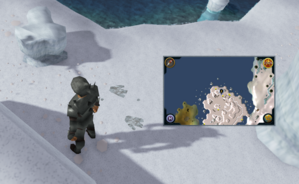 The start of the creature's tracks
Items needed: Equipment for a battle with a level 81 monster 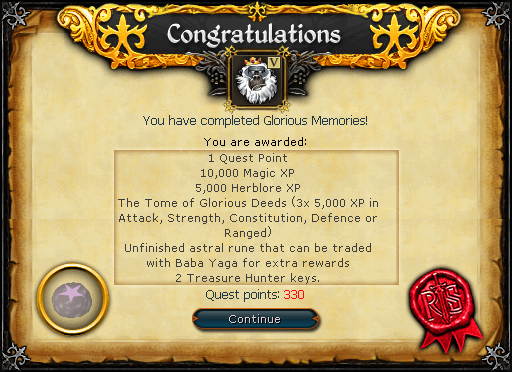 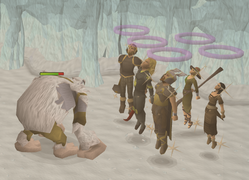 Baba Yaga teleports the adventurers out of the Trollweiss Dungeon. 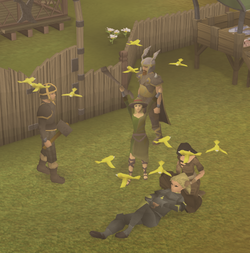 Baba Yaga clears off everyone's memory before teleporting away.

To claim the additional rewards, speak with Baba Yaga in her chicken-leg house on Lunar Isle.

You must talk to her about the astral rune. Make sure you have the unfinished astral rune with you. She tells you it is her lucky rune and asks if she can have it back. She also offers to tell you a story. Tell her you want to know the bits the other adventurers don't remember.

In this cutscene, you again see the adventurers in the dungeon, fighting Nial. The prophecy tablet is on the ground, behind Vargas. Baba Yaga picks up the tablet and then casts the Tele-group Fishing Guild spell to save them from Nial. In front of the guild, Brundt asks Baba Yaga to give him the tablet, but she refuses. She casts the Cure Other spell on Vargas, hoping it will help him, and then casts a spell that clears the memories of the group. The spell shows birds circling around the adventurers' heads, much like the stun emote when you unsuccessfully pickpocket an NPC. She then teleports away.

Back in the present, Baba Yaga said she kept the tablet, thinking it might be useful, but soon lost hope of that. She exchanges the unfinished astral rune for a prophecy tablet and an antique Lamp. When you read the prophecy tablet, it says "And his/her name will be [your Fremennik name]." 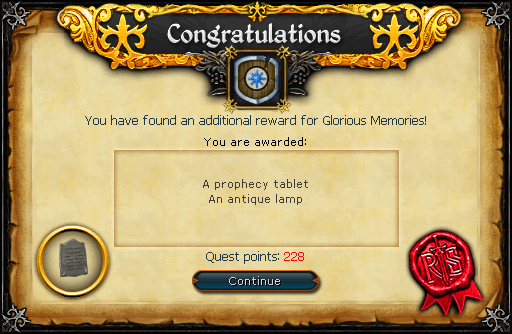 Glorious Memories is directly required for the following quests/miniquests:

It is therefore an indirect requirement for the following quests and miniquests:
Retrieved from ‘https://runescape.wiki/w/Glorious_Memories/Quick_guide?oldid=35815220’
Categories:
Hidden categories: