From the RuneScape Wiki, the wiki for all things RuneScape
(Redirected from Glacors)
Jump to: navigation, search
For the glacor encountered during Rush of Blood, see Wounded glacor. 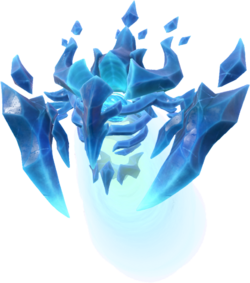 Glacors (pronounced GLAY-soars) are fairly dangerous monsters, described by Beauty as "a rare form of ice elemental". These monsters are only accessible after completing the quest Ritual of the Mahjarrat. You can reach glacors in the Glacor Cave through the fairy ring system by using the code dkq. An army of glacors was summoned by Lucien, although only one actually reached the Ritual, as the others were held back by Kuradal, who had slain a few hundred. According to Zaros, they are originally from Leng.

The ability to have them assigned as slayer tasks by Kuradal, Morvran, and Laniakea can be purchased using 50 slayer points after Ritual of the Mahjarrat.

Glacors are the only creatures which drop the three glacyte boots, worth several million coins each. They are also the only source of Shards of Armadyl, 100 of which can be used to craft an Orb of Armadyl, required to make an Armadyl battlestaff.

Only one player may be engaged in combat with a glacor and its minions at a time, and only one glacor may be fought per player at a time. Players can only fight glacors being fought by other players if the combating player leaves the cave, either via teleporting, walking away from the area, dying, or logging out. Even if the combating player is in a safe-spot and not currently in combat with the glacor or its glacytes, a player trying to attack their glacor will yield the message, "Someone else is already fighting that glacor." This means that glacors must be fought solo.

Use Protect from Magic when the glacor raises its left arm and Protect from Missiles when it raises its right arm. It is also easy to use protection prayers because glacors will not switch attack styles while in combat except for when they use their special attack (after which they will always switch to their ranged attack).

Furthermore, glacors are weak to fire spells in a similar fashion to ice strykewyrms, taking 50% extra damage from the element, including Blood spells from the Ancient Magicks.

When a glacor reaches half health, it will summon its three glacytes, after which it will be invulnerable until they are slain. When all the glacytes are killed, the glacor will inherit the most recently slain glacyte's ability (further explained in Summons), and attack with a faster speed (speed of 4 ticks, from 5).

Glacors may slam both arms on the ground and fire a large cluster of icicles, rather like the icicles used with their ranged attacks. The player must run from the square where they are standing to avoid them. When hit by the icicles, you will lose half of your current life points in the form of type-less damage. If a glacor was attacking with magic and then uses this attack, it will always switch to its ranged attack afterward. If the glacor dies before the attack reaches the player, the icicles will do no damage. This attack can hurt other players who stand on the targeted tile.

Occasionally, the glacor's melee attack will have the same effect as the enhanced ice titans from Ritual of the Mahjarrat. If the player avoids the glacor's melee range entirely, it will not be able to use this special attack. This ability results in freezing the player, rather like an ice spell. There will be bright blue text alerting the player when they are frozen. To break free, the player must rapidly click somewhere on their screen five times. A message is shown when the ice bond is weak enough; five of these messages will result in you being freed. If you do not escape in time, you will be dealt with very heavy damage. If the glacor dies while doing this move, damage will not be dealt but you will still need to break free to move. Freedom and Anticipate have no effect on this special attack.

Similarly, the glacor's magic attack is also capable of binding the player, similar to ancient ice spells. Using protection or deflect magic prayers will prevent the player from getting frozen. Freedom and Anticipate function as normal when dealing with this bind. While this freezing effect will not damage the player on its own, it can be a nuisance if it occurs right before the glacor launches its special attack or an Unstable glacyte is about to explode. Because of this, it is suggested to use anticipate the moment the glacor spawns its 3 glacyte minions.

When the glacor has half of its life points remaining, it will spawn three different glacyte monsters that must be killed before the player can damage the glacor again.

Once all three glacytes are dead, the glacor will inherit a special ability similar to that of the last killed glacyte. For example, a glacor will take 60% less damage if its enduring glacyte is killed last. Glacors will also attack faster after their glacytes are dead, at speed 6 instead of speed 5. It is recommended to kill the Unstable glacyte last, as this will result in the fastest and most efficient kills.

The unstable glacyte has a bar above its head, rather like the adrenaline bar seen on players, that indicates when it will use its special ability. Once the bar fills, the glacyte will stop moving and shortly thereafter explode, losing 90% of its current health and making it easy to finish off. The player will lose 1/3 of their current life points if they are standing next to it when it explodes. The free loss of health is deceiving, however; if the glacyte is not killed quickly after it explodes, it will rapidly regenerate its life points and begin to fill its bar once again. Fortunately, the glacyte stops healing once the timer starts.

Be careful of other players' unstable glacytes and explosive glacors, as both can injure you, even if they are on another player. Glacors have a larger explosive reach as well, with a 5x5 explosion as opposed to the 3x3 of the glacyte.

The sapping glacyte will drain 20 of the player's Prayer points each time it hits.

Sapping glacors will drain 50 Prayer points per hit, rather than the 20 of the glacyte.

These mechanics make the Penance aura a useful choice for glacors.

The enduring glacyte takes less damage the closer it is to its glacor. This ranges in effectiveness from complete invulnerability when it first spawns, to taking normal damage after it is around 14 spaces away from the glacor. It is therefore recommended that players draw the glacyte as far out as possible in order to speed up their kills.

Enduring glacors take 60% less damage, regardless of how far away you are from them.