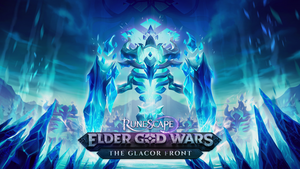 Promotional art featuring the Arch-Glacor leading an army of glacors and glacytes, with Wen looming in the distance.

The Glacor Front is the second of four fronts of the Elder God Wars Dungeon, released on 31 August 2021. The front has no requirements to access; however, level 84 Slayer is required to fight glacors in this part of the dungeon.[1] Additionally, the completion of Sliske's Endgame, Desperate Measures, and City of Senntisten, as well as their prerequisites, is recommended for a better understanding of the story, as the front is considered the next installment in the ongoing Elder God Wars narrative. The Shard of Erebus prevents the Slayer monsters in the area from being aggressive, while the upgraded pontifex shadow ring provides improved Elder Troves and increases the effectiveness of protection prayers against the boss.

The Glacor Front features the second assault on the cathedral in Senntisten, where united forces of the young gods keep the eggs of the Elder Gods from hatching and destroying Gielinor in the process. The attack to the south of the cathedral is led by an Arch-Glacor and its army of glacors, who have been summoned by Wen in an effort to reclaim the eggs. Azzanadra, along with several mages, are holding Arch-Glacor's powers at bay near the aqueduct.[1]

For the duration of the first week after release, Jagex instated a Free death week [1]

Glacor Front is located in the southern section of Senntisten, which can be accessed by ancient door north of the Archaeology Guild (which can be quickly teleported to with Archaeology journal) and directly east of Tolna's rift. After entering Senntisten the player needs to access the cathedral to the south of the entrance and then leave through southern cathedral door. Passing through the western door for the first time triggers a cutscene. 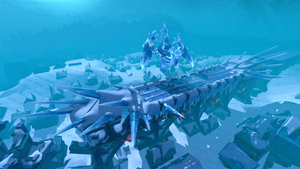 The Arch-Glacor is the force leading the Glacor Front, responsible for freezing the environment. It can be fought on the aqueduct in the southernmost part of the front, accessed by the Aqueduct Portal. The boss has been designed as customisable and scalable in an effort to introduce more players to bossing and teaching how to deal with various mechanics. In normal mode, the boss fight can be customized to remove or add mechanics by talking to one of the mages near the boss area or interacting with the interface. The amount of chosen mechanics affects drops, but killing the boss with no mechanics selected is still considered worthwhile and provides kill count and progress in the Soul Reaper assignment. The mages consist of Charos, Ariane, Arianwyn, Akthanakos and Enakhra.[1]

Like Kerapac, the bound, the encounter also features a hard mode encounter, which can only be accessed by defeating the boss at least once with all mechanics active in normal mode in a solo encounter and talking to Azzanadra near the mages. In hard mode, the boss has an enrage system similar to Telos, the Warden with mechanics being added/adjusted with enrage (although focusing more on health / damage scaling than adding mechanical depth), along with titles upon defeating the boss at specific enrages. While the normal mode is massable, hard mode is restricted to only one player. The hard mode is the only source of Frozen Core of Leng, required to craft the tier 95 weapons.[1] 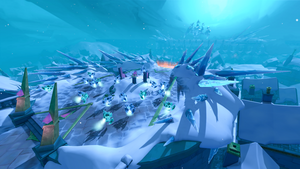 Glacors occupying the central area of the front.

Players with level 84 Slayer can fight glacors and glacytes without completion of Ritual of the Mahjarrat. They are found on the bridge leading south from the Cathedral and in the central areaup to the barrier separating them from the boss area. Shard of Erebus stops the creatures from being aggressive. Glacors share the same drops as the ones in Glacor Cave, including glacyte boots and the shards of Armadyl. Glacytes can drop glacor remnants used to craft a variety of rewards. Both creatures drop resonant anima of Wen or its tradeable variant after upgrading the pontifex shadow ring. The glacors are part of Senntisten Slayer collection log, building up from Nodon Front.[1]

Additionally, the five generals from God Wars Dungeon and Heart of Gielinor found throughout different fronts can aid the player by providing a special ability which can be used while fighting Slayer monsters.

The majority of rewards from the Glacor Front needs to be crafted from a number of items dropped by the glacors, with some being unique to the Arch-Glacor on its hard mode version.[2]

Throughout the Glacor Front a number of allied NPCs can be found, providing additional narrative background or gameplay options. The front is defended by the combined force of Elven Knights from Cadarn and Iorwerth Clans.

The reveal of the second front of the Elder God Wars Dungeon was announcemed in the newspost on 16 August. On 18 August it was followed by a short video teaser revealing it will focus on Wen and using the artwork of Leng, homeworld of glacors, made for the stage reading of The Journal of Fell Arnessen, story that first mentioned the Arch-Glacors during RuneFest 2018. However the Arch-Glacor was removed from the teaser version of the artwork.[3][4] The The Glacor Front was officially revealed during the introduction stream on 20 August 2021. The stream included a speedpainting of the front artwork by artist Willoway, followed by reveal trailer which provided the name and release date of the update, as well as the first look at the front, including the boss, Slayer content and some of the rewards. During the stream the developers showcased the Glacor Front in more detail and discussed the development and aims of the project. It was explained that the Arch-Glacor was designed as a way to introduce greater variety of players to PvM by providing a customisable and scalable encounter than can be used to gradually learn combat mechanics and behaviours, while also providing increasing challenge for more experienced players. The environment was designed to have the aqueduct with the Arch-Glacor looming in the distance as the central focal point that the rest of the area builds up to. Mod Blkwitch got that idea from the concept art of mages on the balcony which she saw before even knowing she would work on the project. She wanted the aqueduct to be the same one that is used in the boss enounter, as opposed to interior of the Colosseum in the Nodon Front, which is actually a separate location using different scaling. The Arch-Glacor, created by Mod JT, was enlarged several times to be more visible from the distance, however due to limited draw distance for non-player characters in NXT client, the Arch-Glacor visible from afar is actually an environment piece rather than NPC. Another visual narrative element was expanding the previous front by adding more wounded to the infirmary.[5][6] After the stream a summary newspost was published.[1] On 27 August another newspost was published, introducing details about the rewards, including their effects and materials needed to create them.[2]

With the release of the Croesus Front on 27 September, the Glacor Front was expanded and underwent a number of changes. Helwyr and the defence line were moved to the other side of the bridge, which was populated with a number of glacytes. The Raptor was added in Helwyr's previous location and fights a non-attackable glacor. Lord Iorwerth appeared near Helwyr, while Baxtorian, additional elven knights and barricades were added in the elven camp on the eastern overlook. Ozan a number of elven archers were added on the western overlook. Sir Owen was added next to the barrier beyond the Slayer area. Additionally the bridge leading to the Glacor Front became covered in large icicles, the water under the bridge became completely frozen, the icy ground textures were expanded and more houses below were covered in snow. The wounded knights on the bridge were partially moved to the Cathedral and a number of non-interactive elven and glacyte dead bodies were added throughout the area.

On an update on the 1 November, Voicelines of the different mages holding the Arch-Glacor at bay were added, with them commenting on various parts of the fight, such as mentioning what the next mechanic will be or praising the player should they land a powerful blow.

Ariane explains the fate of Leng.