Gielinorian Giving II is a time limited charity event, released on 2 October 2017. In this event the player gathers charity tokens for Kat, Zoed, and Lau'Ra found north-west of the South-west Varrock mining site. The event lasted until 23:59 UTC on 15 October 2017.

Each time the player logs in during the event, they will be greeted with one of the following announcements:

Event noticeboards and the Events interface could be used to teleport to the north of the crater for the duration of the event.

During the event, some skills can offer bonuses to the amount of charity tokens players earn when training that skill. There is a 20% bonus increase when training Constitution, Prayer and Agility. 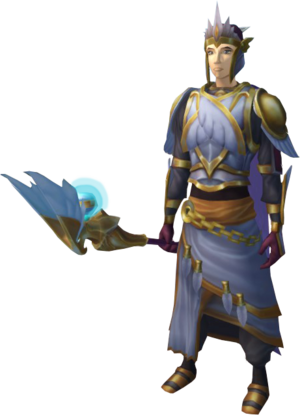 The following rewards are unlocked at certain thresholds of charity tokens handed in are listed below. If the player converts tokens directly to event mystery boxes, the converted tokens do not count for these thresholds.

This information has been compiled as part of the update history project. Some updates may not be included - see here for how to help out!
Retrieved from ‘https://runescape.wiki/w/Gielinorian_Giving_II?oldid=35857087’
Categories:
Hidden category: