From the RuneScape Wiki, the wiki for all things RuneScape
Jump to: navigation, search
The Old School RuneScape Wiki also has an article on: osrsw:Giant lobster (Ghosts Ahoy)
This article is about the lobster fought in Ghosts Ahoy. For other uses, see Giant lobster. 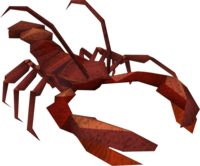 The Giant lobster lives in the wrecked pirate ship directly north of the Alice's husband's farm, which is west of Port Phasmatys. It emerges from a chest when players attempt to open it. It must be defeated in order to obtain the Map scrap contained within its chest. It attacks only with melee and is very weak. If you take too long to kill it, it disappears and you'll have to fight it all over again. It can only be killed once. Oddly, like the Giant lobsters fought in The Slug Menace, it counts for Scorpion slayer tasks.