From the RuneScape Wiki, the wiki for all things RuneScape
Jump to: navigation, search
The Old School RuneScape Wiki also has an article on: osrsw:Giant champion scroll
Giant Champion's scroll? (edit)

The Giant champion's scroll is an extremely rare drop from a Hill giant. The scroll is a challenge from the Giant Champion. By bringing this scroll to Larxus in the basement of Champions' Guild, you may fight the champion in Champion's Challenge distraction and diversion. This is only for members.

Luck enhancers have no effect on the chances of obtaining this scroll as a drop, although a Champion scroll enhancer does. When in your inventory, the enhancer gives a 20% higher chance of receiving a scroll. The enhancer has 250 charges to start with, and one charge is used whenever you kill a creature that has a chance of dropping a champion scroll. It will disappear when all the charges have been used up.

You will get 1,245 experience in constitution and slayer for completing this challenge. When fighting this creature, you may only use melee to attack him.

The following text is transcluded from Transcript:Giant Champion's scroll.

Get yourself to the Champions's Guild, if you dare face me, puny human. 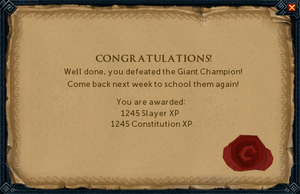