From the RuneScape Wiki, the wiki for all things RuneScape
Jump to: navigation, search
Giant's hand? (edit)

A Giant's hand is an item obtained through Balthazar Beauregard's Big Top Bonanza Distractions and Diversion. It is rewarded to players who earn between 1 and 500 points in any of the circus performances, and is the last piece of the Audience costume. Despite its name, it is not associated with any in-game giant. If players lose this item, they can talk to Balthazar Beauregard to obtain it.

Following an update on 17 March 2014, an override version became available along with the original item version. It overrides certain 2 handed weapons worn the weapon slot, and is held like a slashing 2h sword over the shoulder. 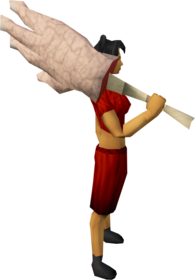 The update history project is a work-in-progress – not all updates to this topic may be covered below. See here for how to help out!
Retrieved from ‘https://runescape.wiki/w/Giant%27s_hand?oldid=33929546’
Categories:
Hidden categories: