Ghosts from the Past

From the RuneScape Wiki, the wiki for all things RuneScape
Jump to navigation Jump to search
For the achievement, see Ghosts from the Past (achievement).

Ghosts from the Past is a part of the Tales of the Arc miniquest series.

On the Islands That Once Were Turtles, speak to Quartermaster Gully. Select the miniquest option, then go through all the chat options, make sure you press "Enough questions. Let's move on." at the very end to progress forward.

Skulls of the skulls[edit | edit source] 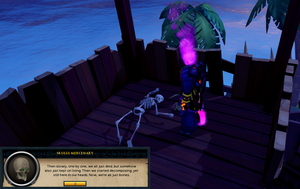 Getting information from one of the skeletons.

Ghosts from the Past is directly required for the following quests/miniquests:

This information has been compiled as part of the update history project. Some updates may not be included - see here for how to help out!
Retrieved from ‘https://runescape.wiki/w/Ghosts_from_the_Past?oldid=35851375’
Categories:
Hidden categories: