Gertrude's Cat is a short quest in which you have to find Fluffs, Gertrude Fairweather's lost pet cat. Completion of the quest allows you to adopt a feline companion of your very own.

Gertrude's cat has been missing for some time now. This has got Gertrude very worried, so could you help rescue her prized pet?

Handling cats isn't an easy business. They get hungry and need plenty of attention, but if you're the pet type, then this is the quest for you!

Head west from Varrock Square, following the road towards Gunnarsgrunn (formerly known as Barbarian Village) until you come across a musician's resting spot. Gertrude's house is directly south of this musician. If you don't already have one, go behind the house and pick up a doogle leaf. Now go inside the house and talk to Gertrude; she will tell you that she has lost her cat named Fluffs. She asks you to go and talk to her children, Shilop and Wilough, in Varrock Square.

Items needed: Raw sardine, Bucket of milk, Doogle leaves (can be obtained from behind Gertrude's house), and 100 coins

Travel to Varrock square and speak with her children. They will tell you that they have a secret hideout where they took Fluffs with them, but won't reveal its location until they get something in return. Give them 100 coins in exchange for the location.

Head to the Lumber Yard, the secret hideout, which is north-east of Varrock, north of the Earth altar, and directly east of the Jolly Boar Inn. Once at the lumber yard, look for a broken fence on the west side that you can squeeze under (red line on minimap). Climb up the ladder in the north-eastern building and you will find Fluffs.

When you try to pick her up, she refuses to move, and also seems thirsty; use the bucket of milk on her. Try and pick her up again, but she still refuses to move and is now hungry. Use the doogle leaves on the raw sardine to make a doogle sardine, which Fluffs will happily eat. Make sure to choose "Pick-up" to get to the next prompt, as the "Stroke" option will suggest you keep feeding her. Be sure to click through the entirety of the dialogue, or you'll have to give her another doogle sardine/bucket of milk for the next prompt.

Try and pick her up again and she still refuses to move. The game will inform you that kittens can be heard mewing close by. Climb down the ladder and search through the jiggling crates until you find three little kittens inside. The kittens will be in different crates for different players. If the kittens are dropped or lost, they will return to a crate, which may be different than the first. Be sure to click through the cut scene dialogue, or you'll have to go back down the stairs and re-search the jiggling crate to re-obtain the three little kittens for the next prompt.

Go back to Fluffs and use the kittens on her. She'll run back home to Gertrude's house with the kittens.

Return to Gertrude to claim your reward. Quest complete! 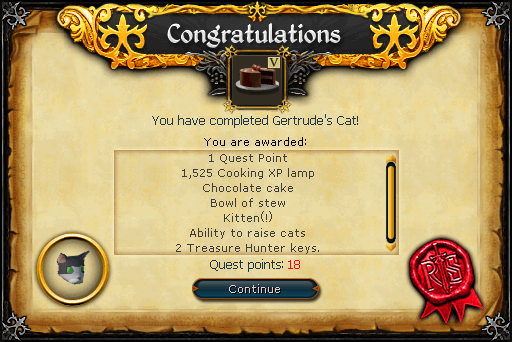 Gertrude's Cat is directly required for the following quests/miniquests: