Genie (Spirits of the Elid)

From the RuneScape Wiki, the wiki for all things RuneScape
Jump to navigation Jump to search
The Old School RuneScape Wiki also has an article on: osrsw:Genie (Spirits of the Elid)

The Genie is encountered in the Spirits of the Elid quest and is the evil brother of the random event genie. The Genie resides in the Elid Genie Cave west of Nardah, accessed through a crevice in the ground.

This Genie has a craving for human souls. During the quest, he requests an adventurer to bring him the "sole" of Awusah the Mayor in exchange for a discarded statue of Elidinis. The adventurer agrees and gives the Genie the soles of Awusah's shoes, which he leaves outside his building. Confusing soul with "sole", he claims that other beings of power are collecting soles these days and thought that he needed to as well. Fortunately the genie isn't very bright and collects soles of shoes rather than souls of people. 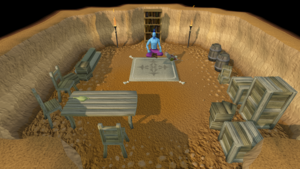