General stores are a type of store throughout Gielinor. The stores are represented by a

icon. General shops sell a variety of items differing from store to store.

Rare items such as a Santa hat cannot be sold to a general store.

General stores can also be used to unnote items, which particularly comes in handy to players far from a bank. To do this, sell as many of the items as you want unnoted to the shop and then buy them back. You will lose a variable amount of coins depending on the item. This does not work for all items - only ones that the shop can buy.

Do note, however, that items which are sold to a general store deplete their stock by 1% of the number of items (with a minimum of 1 item) each minute, based on the in-game clock (not based on when you sell the items to the store).

The closest general store to a bank is most likely the Lumbridge General Store, as it is very close to the bank chest at the market. 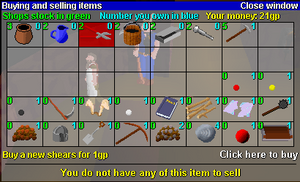 . This was changed due to the fact that the general store didn't even sell pots of flour.

In RuneScape Classic, because the Grand Exchange did not exist, general stores (particularly those in Varrock and Falador) were popular locations for trade, especially in crowded worlds such as World 1. Many players would gather at general stores in order to offload items they did not need, or in hopes of obtaining a bargain by finding an item in the store with a higher street price than the price set by the general store. Because the stores could "fill up" on items sold by players, competition for empty slots in such worlds was intense at times.

The update of 2 September 2009 removed the infinite stock and replaced it with the current system, whereby the amount of items each store possesses is different for each player. This also led to the increase in street prices of items such as cheese and jugs of water, that were once easy to obtain in bulk. The addition of cheese wheels and Milk sellers has since made cheese easier to acquire in bulk again.

The 11 April, 2012 Dungeoneering and Shop Improvements update standardized prices in the general store so that buying or selling prices do not change depending on the stock of the item in the shop.

This information has been compiled as part of the update history project. Some updates may not be included - see here for how to help out!
Retrieved from ‘https://runescape.wiki/w/General_stores?oldid=35505060’
Categories:
Hidden categories: