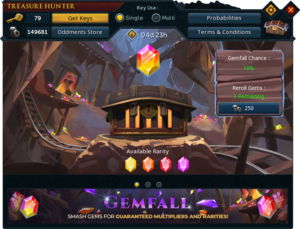 Gemfall, also shown as Gem Fall, is a Treasure Hunter promotion that initially appeared in May 2022.

The normal Treasure Hunter chests are replaced by a single chest that still requires keys to open. At all times there is a bonus active, notified by the number and colour of the gems above the chest. Any time a chest is opened, there is a chance for the gems to break, causing the bonus to be re-rolled. Breaking the gems has a chance to trigger Gemfall that enables the player to choose two out of six prizes without using extra keys and gives three gem rerolls.

The gems can be rerolled using 250 oddments as long as there are rerolls left from triggering Gemfalls.

The following bonuses are available. Each bonus causes the opened chests to yield prizes of at least the rarity associated with the colour and in quantity mentioned in the bonus, and has an initial chance of 10% of triggering Gemfall. Each time that the gems break without triggering Gemfall, the chance goes up by a percentage unit. 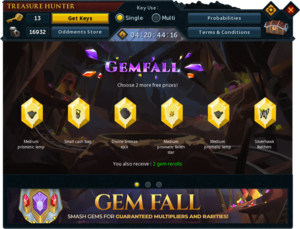 Interface when Gemfall is triggered.

Six extra prizes are offered out of the regular prizes listed above when Gemfall is triggered, out of which two can be selected for free. Prizes offered are always from the same rarity category: fairly common, uncommon, or rare.

This information has been compiled as part of the update history project. Some updates may not be included - see here for how to help out!
Retrieved from ‘https://runescape.wiki/w/Gemfall?oldid=35840200’
Category:
Hidden categories: