The gem necklace token is a discontinued item that was initially obtainable via Treasure Hunter during the Gemerator promotion, and later the Gemfall promotion. Claiming it permanently unlocks the Gem Necklace cosmetic override. The token is destroyed when the override is unlocked.

The token became available again on the 12 July 2016 as a 2nd Chance Tuesday promotion and on 23 December 2016 for one day for the 2016 Christmas Advent Calendar. The token was also available again during the Gemfall promotion from 12 May 2022 through 18 May 2022. 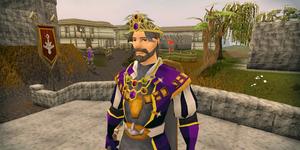 A player wearing a gem necklace and crown.

This information has been compiled as part of the update history project. Some updates may not be included - see here for how to help out!
Retrieved from ‘https://runescape.wiki/w/Gem_necklace_token?oldid=35839885’
Categories:
Hidden categories: