From the RuneScape Wiki, the wiki for all things RuneScape
Jump to navigation Jump to search
The Old School RuneScape Wiki also has an article on: osrsw:Gelatinnoth Mother 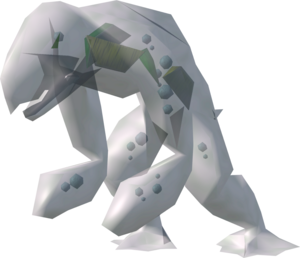 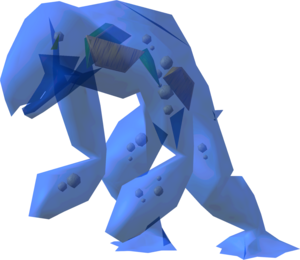 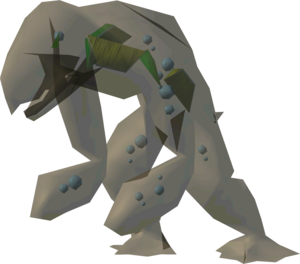 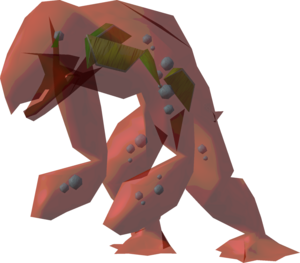 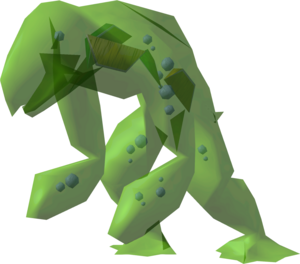 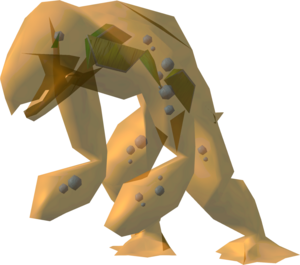 The Gelatinnoth Mother is a monster encountered during the final battles in the Recipe for Disaster quest. She is the equivalent to the Dagannoth mother from the Horror from the Deep quest. She will turn different colours every 15 to 20 seconds, and her colour shows her weakness to a certain type of magic spell or attack.

The Gelatinnoth Mother is fightable along with Karamel as a class B boss monster in the Dominion Tower minigame if the player has completed Recipe For Disaster.

The following table shows her colours in the order she cycles through them in the Defeating the Culinaromancer subquest and lists which attacks she is weak against in each state. You can safe spot the Gelatinnoth Mother at the corner of the arena and wait until the colour of your choosing to attack her.

Players are faced with a dilemma on this monster, as they must defend against both melee and ranged attacks without using prayer, but be able to attack most of the time using magic. If fighting her alongside Karamel in the Dominion Tower, you will also need to defend against magic attacks. The challenge is to find a mix of armour that provides sufficient defence without imposing undue attack penalties.

With good armour, stats, and patience you could be able to use only 1 form of attack to defeat the Gelatinnoth Mother though it is recommended to check the hints below.

A good set of armour is Full Ahrims with an Air staff and an Obsidian shield, as this gives players a respectable mage attack bonus (which players need two-thirds of the time) and also allows players to have a balanced defence against the mother's attacks. Using high class melee armour such as Barrows even while using spells at 65+ Magic still works perfectly fine, as long as players use attacks to which the Mother is currently weak and which negate virtually all of her ranged damage throughout the encounter. (Players should still bring some high-healing food, however, for her melee.) Tested success rate with spells using this armour at level 68 Magic was roughly 80% when using the appropriate elemental spell.

Another great way to get through this fight is with Void Knight equipment. You can cycle through powerful melee, magic, and ranged armour by exchanging the helms. The armour also gives a good defence against all types of attacks.

A slightly less exotic armour mix that works is a mage top and bottom (such as Skeletal armour, Splitbark equipment, or Lunar equipment), a Helm of neitiznot or Dragon helm, and a Rune kiteshield. This combination still has a significant ranged attack penalty, but players can wait until the Mother switches vulnerabilities to begin attacking again.

This information has been compiled as part of the update history project. Some updates may not be included - see here for how to help out!
Retrieved from ‘https://runescape.wiki/w/Gelatinnoth_Mother?oldid=35919858’
Categories:
Hidden categories: