From the RuneScape Wiki, the wiki for all things RuneScape
Jump to navigation Jump to search
Gee'ka? (edit) 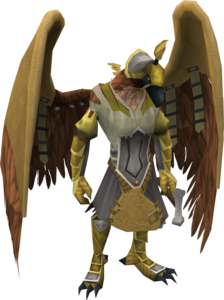 Gee'ka is an aviansie native to Abbinah, who has come to Gielinor with the avian god Armadyl to support him in his fight with Bandos. She appeared during the second world event, The Bird and the Beast, during which she was known as the Armadylean golem master.

Gee'ka works with the Varrock Museum and Guildmaster Tony as an expert in aviansie history.[1]

When spoken to, she stated she is from Taka'ra's tribe, and endured the same struggles as the rest of the tribe until Armadyl returned to Abbinah and reunited with them. After that, she came to Gielinor and learned about golems and how to create them. Thus, she took a position of constructing Armadylean golems to help fight in battle.

Players could vote to choose the specific parts of a golem to give them a specific effect, or to raise their powers offensively or defensively. She also stated that her golems were made from strong parts of 'recently deceased large beasts' to create a skeleton, and then added machine parts, armour and weaponry to them before having Armadyl animate them to become a war machine.

She claimed that a Bandosian thug stole her idea of creating war golems for her chosen god.

When Guildmaster Tony received information of the Stormguard Citadel entrance from the Temple of Ikov's archaeologists, he showed them to Gee'ka, who was extremely shocked and surprised by the news that she almost flew through the ceiling. Armadyl sent Gee'ka to oversee the site; although somewhat confused as she was just a simple golem inventor, she made her way to the dig site.

Upon hearing the adventurer's rapidly growing archaeological skills, Gee'ka invited them to the Temple of Ikov to help discover the entrance to the Stormguard Citadel, and later the secrets it held.

Gee'ka may be recruited to the player's research team as a part of the Archaeology skill once the player has the completed all the mysteries at Stormguard Citadel.

She has the following effects on the research expeditions:

She appears as a consultant in the Team Management interface, and her description is "A one-time golem master for Armadyl, she's happiest when tinkering."

Transcripts Gee'ka is the author or co-author of: