Ganodermic armour is a set of level 75 Magic armour that was released on 28 November 2011. It consists of five pieces, all of which require 75 Defence to wear: visor (head), poncho (body), leggings (legs), gloves, and boots. All five pieces may be obtained in one fashion or another from ganodermic beasts and ganodermic runts, with runts being found at the third and bottom floors, while the beasts can be found on the bottom floor. Both monsters require a Slayer level of 95 to harm.

The ganodermic visor, poncho, and leggings are degradable pieces of armour that must be made with the Crafting skill. Each is made by sewing a number of ganodermic flakes, which are obtained as drops from ganodermic beasts and ganodermic runts, to the corresponding pieces of mycelium web armour. The process requires a needle and thread, as well as different amounts of ganodermic flakes and different Crafting levels, as indicated on the table below. The Assist System may be used when creating or repairing ganodermic armour.

When first used in combat, ganodermic visors, ponchos, and leggings will begin to degrade. After 30,000 charges of combat (a minimum of 5 hours), they will revert to mycelium web armour. Flakes can be added to partially degraded armour in order to restore it to pristine condition, and players can check the status of ganodermic armour pieces with the right-click Check option. Ganodermic gloves and boots do not degrade. When ganodermic armour degrades to 50%, its appearance changes slightly as the yellow spores that dot the pieces disappear. 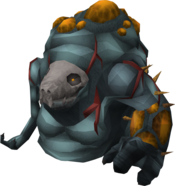 Ganodermic armour, along with its sister sets grifolic armour and fungal armour, are unique among degradable armour sets. The most common method for repairing degradable armour is to pay a certain amount of coins in order to restore it to pristine condition. This is true of Barrows equipment, crystal equipment, Ancient equipment, and superior seasinger's equipment. These items are not destroyed when completely degraded, however. A Guthan's platebody that degrades to 0 is still a Guthan's platebody, albeit one that must be repaired with coins before it can be used.

This common method of item repair functions as a money sink - a mechanic that takes coins out of the game. However, it does not reduce the number of these items that exist in the game. If there is no widespread way of removing a given item from the game, its supply will tend to increase over time as more are brought into the game. Without a corresponding increase in demand, this supply increase will lead to a gradual price drop, oftentimes all the way down to its High Level Alchemy value. Non-degrading equipment such as dragon equipment, abyssal whips, and dragonfire shields are examples of this effect.