From the RuneScape Wiki, the wiki for all things RuneScape
Jump to navigation Jump to search
The Old School RuneScape Wiki also has an article on: osrsw:Games room
For the minigame where players can meet up to play various board games, see Burthorpe Games Room.

The Games room in a player-owned house is a place to relax and play some games that rely both on logic and skills in RuneScape. This room can be created at level 30 Construction, costing the player 25,000 coins. Only one Games Room can be built in a player-owned house. Players may also obtain prize keys from winning games, to receive a reward from the prize chest.

There are 5 hotspots available:

Archery target and Dartboard require a ranging weapon to use. 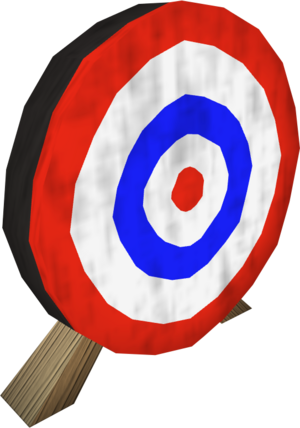 An Archery Target in a Games Room in a player-owned house.

Staves cannot be used to substitute runes when building any Elemental Balance.

Prize chests have a limit on how much you can deposit for the winner:

To build this room with the highest level objects in one go, players would require:

This information has been compiled as part of the update history project. Some updates may not be included - see here for how to help out!
Retrieved from ‘https://runescape.wiki/w/Games_room?oldid=35681110’
Categories:
Hidden category: