From the RuneScape Wiki, the wiki for all things RuneScape
Jump to navigation Jump to search
Not to be confused with Gielinor, World map, or Server. 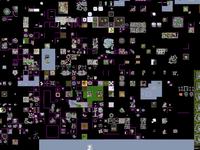 A part of the game world (floor 0), seen in an NXT devloper blog.

The game world is a term defining the relative layout of RuneScape as a system comprised of four floors, and a coordinate system used to travel between them.

The first floor of the game world consists mostly of Gielinor's surface. Building floors are assigned to floors two through four. Notable exceptions to the floor style are dungeons which can be placed on any tier (Prifddinas and Castle Drakan are on the first floor while the Grand Library is on the second floor).

Since the implementation of NXT and HTML5, it became possible for players to view unconnected regions on the same tier floor. The game world was originally designed using the Java platform which had a lower draw distance. Jagex implemented invisible walls between separate sections of each floor to minimise draw distance to the necessary region.

When a player uses teleportation or transportation, the client moves the player using the Coordinates System. The action finds the floor and exact game square the player should appear, and loads that environment.