From the RuneScape Wiki, the wiki for all things RuneScape
Jump to navigation Jump to search
The Old School RuneScape Wiki also has an article on: osrsw:Game square 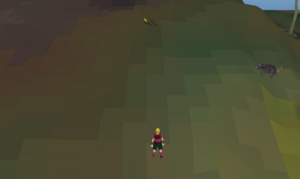 With ground blending turned off, game squares of different colours are easily visible.

Game squares, also known as tiles, metres, steps, or paces are the basic unit of length that divide the RuneScape world. The game squares form a grid, dictating where objects may be. All objects' locations will be defined by a single square. All locations and sizes can only be integer numbers.

Every entity occupies at least 1 game square. Players and dropped items occupy 1 square. Larger monsters, such as Kalphite King and Vorago occupy multiple squares. For these larger monsters, their location is defined by the south-westernmost square they occupy. This is the location used by most calculations, such as where items drop or where Detonate will target. 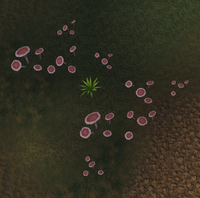 The placement of objects, such as these mushrooms, make game squares easily discernible.

There are many types of tiles, each serving a specific function.