From the RuneScape Wiki, the wiki for all things RuneScape
(Redirected from Game cache)
Jump to: navigation, search

The Jagex cache, also known as the RuneScape cache, is a bundle of files downloaded in the background of the game allowing players to quickly load and play RuneScape. Critical cache files are generally streamed to the player's computer the first time they load RuneScape, with the full cache becoming completely installed over time as the player experiences more of the game.

Every time RuneScape is updated, the cache on a player's computer must be updated to reflect any changes. Currently, the NXT client's compressed cache file is currently 3.3 GB, and the fully downloaded cache to run the Java client used to be 9.58 GB, before it was shut down on 18 December 2019.

The contents of the Java cache consists of models, textures, and maps used in the current client version, as well as models and textures for unreleased content, items, and areas in a compressed form; native libraries for graphics rendering (OpenGL, DirectX and software modes) and other functions that are not available in pure Java can also be found within the cache.

On all Windows versions, the Java cache can typically be located at %UserProfile%\jagexcache\runescape\LIVE and C:\.jagex_cache_32.

The default installation path of the NXT cache is %ProgramData%\Jagex\RuneScape, however this can be changed at will via the NXT launcher's options.

On Linux systems, the Java cache can typically be located at /home/user/jagexcache/runescape.

On Mac OS systems, the NXT cache can typically be located at /Users/user/Jagex/RuneScape.

Players should be cautious if they are to ever share their Java or NXT cache with other players, and are warned to never share their Preference.dat, Preference3.dat, or Preference.cfg from the legacy client and/or Settings.jcache, Settings-###.jcache (Where ### is any number), or GlobalSettings.jcache files from NXT as they contain the players saved login email and TOTP Authenticator Tokens, potentially allowing others to bypass the RuneScape Authenticator and other account safeguards.

Unreleased models and textures commonly show up in the cache. Using third party software, players can view the cache in its entirety. There is no way to tell whether a model or texture is planned for a future update, is a work in progress, or is discontinued and will never be released. In spite of this, many players use third-party software to view the models in the cache and speculate on future updates.

Jagex states in their terms and conditions that "you must not reverse-engineer, decompile or modify any Jagex Product client software in any way (except to the extent allowed by applicable law)."[1] With reference to Section 1201 (a) of US Copyright law,[2] the legality of using such third-party software in the United States is disputed.

Jagex has also publicly stated that tampering with the game code can see "accounts banned from the game," however Jagex has not stated how they are able to discern if a player has viewed their cache, or if viewing the cache counts as tampering with game code. Posts made on the RuneScape Forums regarding the cache are hidden and locked because of outstanding rules on account security and third party software. 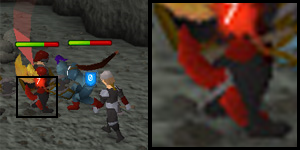 The unknown pickaxe model used in the Game Guide