From the RuneScape Wiki, the wiki for all things RuneScape
Jump to navigation Jump to search
The Old School RuneScape Wiki also has an article on: osrsw:Gadderanks

In Aid of The Myreque[edit | edit source] 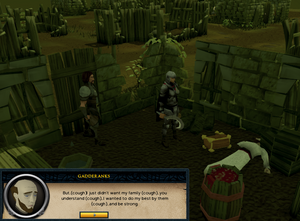 During the course of this quest, Vanstrom Klause, a Vampyre, discovers the occupation of Burgh de Rott and orders Gadderanks, with the Juvinates, to collect tithes from the village. The player, to save the townsfolk from vampyric tyranny and increase their prestige among the villagers, must kill Gadderanks and his bodyguards. As he dies, Gadderanks reveals that he undertook the terrible task to protect his family from any harm, and he reveals some of the weaknesses and fears of vampyres. The player will sadly comment on how he chose the wrong way to gain power. Gadderanks also implores the player to protect his family from the vampyres before he dies.

The Branches of Darkmeyer[edit | edit source]

Although he does not appear himself in The Branches of Darkmeyer, Gadderanks' wife Maria Gadderanks makes her debut in this quest, and is revealed to be a prisoner of the vampyres in Darkmeyer. Once a player earns enough status, she can be freed.