From the RuneScape Wiki, the wiki for all things RuneScape
< Fungal mage
Jump to navigation Jump to search

Fungal mage, found on all floors except the bottom of the Polypore Dungeon, and are commonly killed to being easily accessible to low level mages. Their notable drop is Potato cactus which is a common drop and drops 8 noted at a time.

It requires a 50 Magic for the player to receive as a Slayer assignment.

The following are required to kill Fungal magi. 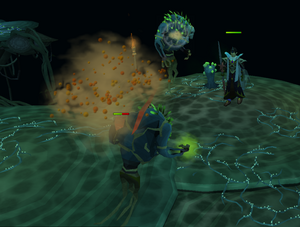 A player fighting a fungal mage.

The following skill levels are recommended for killing Fungal magi. While they are not necessary, they will unlock valuable, helpful perks.

Generally, higher-tier Magic equipment is best against Fungal magi. However, expensive, top-tier armour such as seasinger's equipment and ganodermic armour may not be cost-effective at Fungal magi due to their high repair costs. For this reason, offensive armour is recommended above tank armour. 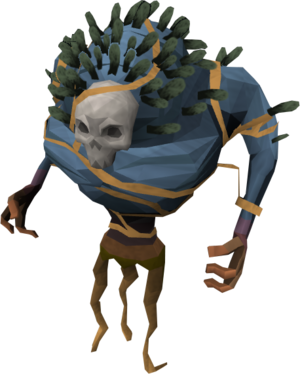 Inventory should include some food or other source of healing, runes for spells, and an emergency teleport. You may also wish to take a Prayer urn for collecting the ashes.

An easy way to get a few safe hits in on the mage is to attack him once, then immediately sprinkle neem oil on the mage. This will give you about three safe hits before the mage starts to attack you.

For high level players, an Aggression potion is highly recommended.