From the RuneScape Wiki, the wiki for all things RuneScape
Jump to navigation Jump to search
Wikipedia also has an article on: wikipedia:Fruit bat
This article is about the Summoning familiar. For the gnome food, see Fruit batta.

A fruit bat is a non-combatant familiar that a player may summon with 69 Summoning. Its inventory has 30 slots, and it can forage up to 30 pieces of fruit before withdrawal is required.

The Fruit Bat scroll (Fruitfall) enables the use of the fruitfall ability for a fruit bat familiar. The scroll is made by using a Fruit bat pouch on a Summoning obelisk. 10 scrolls are created from one pouch.

Fruitfall is the fruit bat's special move. Casting it sends the player's bat in search of fruit. Up to eight fruit will drop to the ground around the player. However, the average number of fruit is two; getting five or more is very rare. The bat can also fail to retrieve any fruit at all. Fruitfall can be used anywhere, except inside a building and in caves/dungeons (although it does work in the God Wars Dungeon). Papaya fruit are produced whenever the ability is successful. Lemons, limes, bananas, and oranges are also frequently generated.

This special ability is often used for moneymaking. Papayas, specifically, sell for substantial amounts on the Grand Exchange due to their use in paying for protection of palm saplings in farming patches, adrenaline potions, and pawya hunting.

Since the scroll is stackable and produces food, this familiar's special ability can also provide large amounts of healing. However, unlike familiars with healing abilities, the food is dropped on the ground next to the player, requiring it to be picked up and cut before eating. Due to its inconvenience and the value of the fruit produced, it is rare to see players using fruitfall for healing.

The Fly option, accessed by interacting with the bat, can only be used on Karamja. Each usage of Fly takes around 8 seconds and results in up to 5 fruits being stored in the fruit bat's inventory. It can be used indoors as long as the player is on the ground floor[UK]1st floor[US]. Unlike fruitfall, this move doesn't use the special move bar or require a scroll.

The timer is paused while the bat is off gathering fruit. Thus, Fly can be used repeatedly for many hours and can net thousands of pieces of fruit with a single pouch. In a pinch, it can be used as an almost infinite source of healing. However, it is not recommended to rely on Fly as a source of food, as it can only be used on Karamja and takes far longer than the healing time of specialised familiars.

Fly can be used in conjunction with the Fruit Bat scroll (Fruitfall). A common strategy is to cast fruitfall until the special move bar is drained, and then use Fly while it recharges. This can be done at a bank, deposit box, or tool leprechaun. It should be noted that leprechauns only note fruit that can be player-grown, which excludes lemons and limes.

The Fruit bat forages papayas, pineapples, coconuts, strawberries, watermelons, strawberry seeds, and watermelon seeds. Thanks to its lengthy timer, it can produce a significant volume of fruit, enough to make up the cost of its pouch several times over. 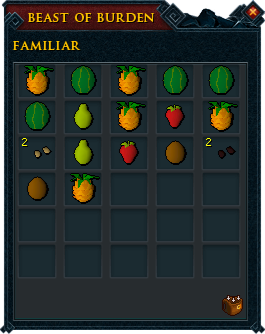 A typical inventory of a fruit bat after 45 minutes