From the RuneScape Wiki, the wiki for all things RuneScape
< Frost dragon
Jump to navigation Jump to search

Frost dragons are dangerous level 112 dragons residing in the Asgarnian Ice Dungeon resource dungeon. Frost dragons are often killed for their valuable frost dragon bones, worth 27,579 coins, as well as the chance of other valuable drops such as the draconic visage.

To access the Asgarnian Ice Dungeon resource dungeon, 85 Dungeoneering is needed. It is also suggested to have a good stab weapon, 80+ in all combat stats in your choice of combat class, 70+ prayer and 52+ summoning.

Due to their stab weakness, weapons such as the Chaotic rapier, Blade of Avaryss, Attuned crystal dagger, Drygore rapier and their off-hand counterparts can be effective against frost dragons. However, any mid to high level melee weapon can be 100% accurate against frost dragons with boosts applied, such as Overloads or the Piety/Turmoil prayers.

The frost dragons' magic attack is very inaccurate; however, it hits between 100-500 and can kill a player over time. Therefore, a familiar such as a Bunyip or Unicorn stallion will extend trips. Frost dragons always stick to ranged or magic attacks throughout the fight. The chance is random, so it is advised to change to the corresponding protection prayer depending on the first regular attack, whether it is a ranged attack (thin blue projectile) or a magic attack (Water spell).

The fastest method of killing the dragons is to use melee weapons with the Soul Split curse and Piety/Turmoil activated. Suggested for this is Bandos armour, Torva armour or Anima Core of Zaros armour because of the offensive bonuses. If the player has access to Invention perks, the Dragon Slayer perk can be used for a 7% damage increase against the dragons. Warpriest armour can prove to be a quality low level substitute to higher levelled armour, as it provides respectable balanced defence from their strong varied attacks without compromising melee accuracy. However, this is not recommended due to the low cost and high effectiveness of Bandos armour.

Using Magic or Ranged is not recommended, as ranged and magic armour have a low ranged defence, and as of the Halloween 2011 update, Frost Dragons now use a ranged attack which hits up to 500 life points. Players can still use Magic or Ranged, but would require a higher tier setup. Frost Dragons also have high magic defence, so spells can splash very often. With higher levelled gear, and the boosts mentioned above, Ranged/Mage weapons can reach a similar effectiveness to melee weapons.

Possibly the best way to bank Frost dragon bones, as of 14 February 2012, is to have a Tokkul-Zo equipped and bank using the teleport on the ring then lodestone back to Port Sarim while restoring prayer and summoning points as you run back to the dragons. Alternatively to the lodestone, just north of the fight caves, the Fairy ring aiq can be used to teleport to the Mudskipper Point, which is a short run from the dungeon.

Banking Alternative: Using Frost Dragon Bones on Magic notepaper will convert the bones to noted. Magic notepaper costs 424 so you will be making 27,155 a bone instead of 27,579 but will not have to bank as often. An upgraded Bonecrusher will automatically pick up the bones left behind by the dragons, which makes it easier for the player to use Magic notepaper on the bones. This also allows for more kills per hour, as the player won't have to worry about manually picking up the bones. If the Death Note relic is available, it can be used to receive noted bones as drops, eliminating the need for magic notepaper. 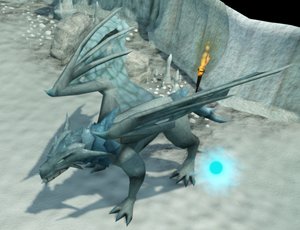 Frost Dragon with an active blue orb circling it.

When fighting Frost Dragons, a small blue orb will occasionally appear and start circling the dragon. It is important that you do NOT attack while the orb is out, as it will rebound 80% of any damage you would've dealt.

Your familiar should have:

Keep all the other spaces for your frost dragon bones or any other valuable item(s).
Retrieved from ‘https://runescape.wiki/w/Frost_dragon/Strategies?oldid=35585361’
Categories: