From the RuneScape Wiki, the wiki for all things RuneScape
(Redirected from Friend's chat)
Jump to: navigation, search
The Old School RuneScape Wiki also has an article on: osrsw:Clan Chat
This article is about the group chat. For the chat with certain friends only, see Private chat. 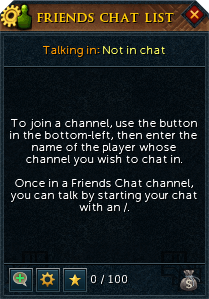 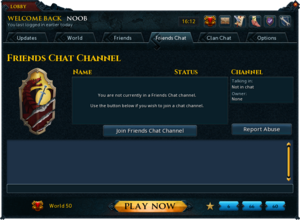 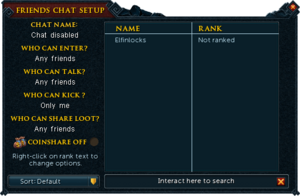 If a channel reaches the player limit (100) and any ranked player tries to join, another player with a lower rank than the one entering will be kicked to make room. Otherwise, any other person will be told "This chat is currently full", and will have to wait until someone leaves to rejoin. 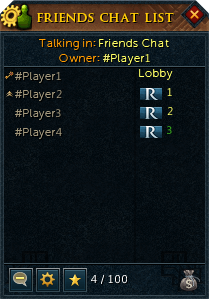 The Friends Chat interface shows the name and creator of the channel the player is currently chatting on. In addition, each player in the channel (up to 100) is shown on a list, along with their channel rank and current world.