From the RuneScape Wiki, the wiki for all things RuneScape
(Redirected from Fremmenik)
Jump to: navigation, search
The Old School RuneScape Wiki also has an article on: osrsw:Fremennik 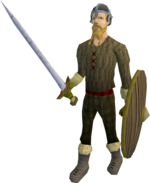 Eventually, they abandoned their nomadic way of life, creating the village of Rellekka. While this greatly improved life for most Fremennik, some disagreed with this way of living and left the tribe, grouping together to form the Mountain Tribe. Until today the Mountain tribe travels around the mountains east of Rellekka. This angered the Fremennik, and the two tribes were somewhat bitter towards each other ever since, until the player fixes the relation up a bit during the Mountain Daughter quest.

Some years after, a Fremennik seer discovered a rock that was revealed to be rune essence, which gave the Fremennik the ability to use magic. This knowledge quickly spread to other kingdoms outside of the Fremennik province, making them even more powerful than before. The discovery of magic caused a great struggle within the Fremennik tribe. Some believed the Fremennik could use the magics of the essence to defend themselves from the races that were constantly seeking to conquer their land. Others believed that the rock was not to be used by mortals, and that the gods would destroy them if they used it. The tension grew until many more Fremennik separated themselves from Rellekka and departed for Lunar Isle, where they would form the Moon Clan. The Moon Clan became the most developed in magic in the human history. The Fremennik are at war with the Moon Clan to this very day.

Taking advantage of Rellekka's temporary weakness in numbers and absence of awareness, the Mountain Tribe attacked the village and stole the ancient rock which symbolised the discovery of the rune essence, taking it back to their encampment. The two tribes avoided contact from that point on, until the Mountain Daughter quest, in which the player breaks the rock in two and gives one half back to the Fremennik in Rellekka.

In Fremennik history, other groups had splintered from Rellekka as well.

In years 32-60 of the Fifth age, groups of Fremennik conducted a series of armed invasions of Kandarin, Asgarnia, Misthalin, and the Imcando dwarven territory of Ice Mountain in an effort to stop the creation of rune stones by humans. Eventually the crusade faultered and the settlement of Barbarian Village was established; eventually becoming the permanent settlement of Gunnarsgrunn.