From the RuneScape Wiki, the wiki for all things RuneScape
Jump to navigation Jump to search
For the music track, see Saga (music track).

Skaldrun, the storyteller of the Fremennik Sagas

The Fremennik Sagas are a combination of Questing and Dungeoneering, where sagas told by Skaldrun play the main role. The first three sagas—Three's Company, Vengeance, and Thok It To 'Em—were released on 1 June 2011. The latter two—Thok Your Block Off and Nadir— were released on 24 April 2012. All sagas except Three's Company are members-only.

To take part in the sagas, Skaldrun must first be unfrozen. He appears randomly on the frozen floors (floors 1-11) during a game of Dungeoneering (complexity 2 or higher only). He must be unfrozen by lighting some logs next to him, or a fire-based spell. After he has been found and freed, he can be found on the surface of Daemonheim near Thok.

To be able to play any one of the five sagas, players must then find an item while Dungeoneering that jolts Skaldrun's memory about that specific saga. These items cannot be found until after Skaldrun has been found and freed. Each of the five items has a specific range of floors that they can spawn on (listed in each saga's section below). All five items can be found on floors of any complexity.

If you log out in the middle of a saga, you can restart it from the last saved position (the last key door unlocked).

In order to begin, the player must first unfreeze Skaldrun. This is done by Dungeoneering on the Frozen floors (1-11) in Daemonheim, with Complexity 2 or higher activated. Skaldrun appears randomly in a room, frozen in ice. Kill all the monsters in the room so that the discussion with Skaldrun cannot be interrupted. Light any type of fire adjacent to the ice or cast a fire spell on the ice. Talk to him. Choose each option. Once done, tell him to "Leave" and he teleports to the surface.

It does not matter if some or all of the other members of a dungeoneering team have already released Skaldrun - they do not see Skaldrun or the memory fragments.

The memories can be unlocked in any order, but the fragment required to start the lowest level saga is a bear pelt - it appears randomly on one of the frozen floors, but many players find it in the same room where Skaldrun was frozen, at the same time. The bear pelt is white and shiny, and catches players' eyes upon entering the right room. None of the memory fragments appear as a red dot on the minimap. Touch the bear pelt and it disappears. After touching the bear pelt, the player receives a message in the chatbox stating to start the memory the player must talk to Skaldrun.

Unlike unfreezing Skaldrun, it is possible to find all fragments on complexity level 1 dungeons.

The fragments are relatively common and shouldn't be too difficult to find. If you find yourself completing several floors without spotting any memory fragment, talk to Skaldrun and go through all of his chat options. It may be that you already found a fragment and have not turned it in yet.

At 99 Dungeoneering you are freely given any memory fragments you are missing by talking to Skladrun. 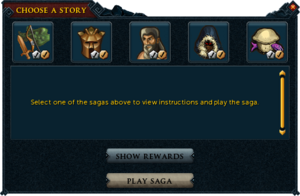 The interface to choose which story to hear

No items (not even the Ring of kinship) can be taken into the saga. Find Skaldrun located west of Thok, Master of Dungeoneering, and talk to him to select an unlocked saga. When you start a saga, there is no Daemonheim Smuggler to aid you.

If you quit a saga or log out, you reappear next to Skaldrun.

When you start the saga again, you can choose to start from the last saved checkpoint or from the beginning. The save checkpoint is the act of unlocking a door requiring a key to open. Rooms that were completed but not part of the story-line to the most recent key-unlocked door are lost. The heroes are returned to full health and the food available at the beginning of the saga is respawned (this is useful if you were running out of food and health).

If you have the appropriate levels, you play the unabridged version. There are side objectives which are tasks that need to be completed that are not part of the main plot. You are given some hints about these objectives, but you are not told what they are or even how many there are. The locations needed for the side objectives (obelisks, etc) are not shown on the mini-map, although items are shown as red dots. It is possible to find yourself in a situation where an objective cannot be completed (e.g. if a particular item of food is needed, and it has already been consumed).

If you fail to complete all the side objectives before you finish the saga, you only receive the abridged tome and you have to replay the saga from the beginning again to obtain the unabridged tome. Unless you are following a walkthrough, you should expect to play each saga at least twice, the first time simply to discover how many side objectives there are!

Three's Company (saga) is the first saga that can be played. It involves controlling the Signature Heroes Ariane, Sir Owen and Ozan, in order to catch the notorious bandit Carn. It can be started after finding a Bear pelt (Three's Company) on one of the Frozen floors (Floors 1-11). It is the only free-to-play saga. 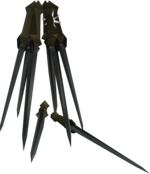 Four adventurers journey to Daemonheim and leave all but one dead. The survivor is in the mood for vengeance. It can be started after finding a Collection of swords on one of the first Abandoned floors (Floors 12-17). It is only available to members.

Announced in the same post as the second Thok saga, this one follows Moia as she disguises herself as dungeon inhabitants in order to find "Bill" and discover the secrets of Daemonheim.

It is started by finding a Damaged device on Floors 18-22. Upon finding the item, you get the following System message: "The device appears to be badly damaged, but you seem to sense some slight activity within as it vanishes in your hand and becomes little more than a memory. Skaldrun may be able to tell you more about its origin."

Thok tells a tall tale about killing beasts in novel ways. It can only be started after finding the Scribbled Note on one of the second Abandoned floors (Floors 30-35). It is only available to members. 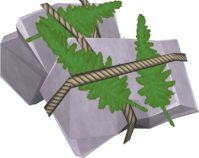 This saga yet again features Thok trying to beat Marmaros in a battle of brawn, with the winner being the one with the higher killcount. To start the Saga, you must find a Rock and Twine Bundle on the Occult floors (Floors 36-40) of Daemonheim.

Upon finding the Rock and Twine Bundle, you receive the following system message: "The strange object, seemingly a bundle of rock and twine, both confuses and astounds you with its majesty before it fades and becomes little more than a memory. Skaldrun may be able to make some sense of this."

Thok also does not have access to his sword. In addition to Dungeoneering xp, there is also Strength xp as a reward. It is a members-only Saga and you need 71 Dungeoneering (to reach Floor 36) and 75 Strength. The guide states 65 Dungeoneering as a requirement, but you cannot access the floors required.