Freeloading, also known as leeching, bludging or loafing, is the process of doing little to nothing to contribute to the game, in order to obtain the reward for doing the activity without participating.

It was most commonly seen on team activities such as Pest Control, Fishing Trawler, The Great Orb Project, and Soul Wars; however, updates to these minigames have rendered freeloading nearly obsolete for most activities.

Freeloading used to be very popular with the Fishing Trawler minigame until an update on 16 June 2009 added an activity bar. The change was made to deter players from not participating in the event, but still receiving rewards. Having seemingly worked, Fishing Trawler has since become less populated with freeloaders.

There is no activity bar in Pest Control, however freeloading does exist. Player may only attempt the bare minimum to reach the required 5,000 points of damage to be awarded each game. Repairing a barricade or gate on the island acts as 500 points, allowing players who may not be able to get the required points in the time allotted or players who do not want to train a combat-related skill to receive points. Therefore, if a player did no combat at all during a game of Pest Control, they would have to repair 10 barricades or gates. You can get 500 points of damage from repairing gates on any level boat. 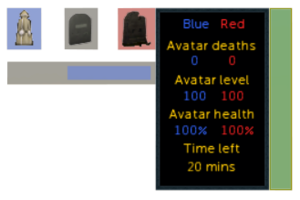 Soul Wars, while having an activity bar similar to other minigames, still has a large problem with freeloaders. The activity bar diminishes and changes from green to orange to red over time, but can be replenished when a player fights, uses soul fragments, buries bones, uses bandages on teammates, or dies during the game. When the bar is completely depleted, the player is removed from the game without zeal, and cannot rejoin the waiting lobby for 10 minutes.

Freeloads often times choose to suicide into the opposing team, resetting their participation level upon death. Some others pick up bones to keep their activity bar up, as every set of bones picked up gives a small boost, and there is usually a ready supply of them laying around.

Players used to freeload in The Great Orb Project by simply staying online while others played out the game. An activity bar is now present next to current score indicator, which shows how active the player is. This bar gradually depletes over time. Once a player's bar reaches the bottom, the player will be removed from the minigame and sent back to the Guild. In order to keep the bar up and to stay in game, players must attract/repel orbs or create and destroy barriers which will fill a portion of the bar. The bar is reset and pauses at each break between altars, to start back at the start of the next altar.

Freeloading in Castle Wars is still common, as there is no activity bar helping to deter freeloaders. Freeloaders just stand around (and some of them AFK) the arena doing nothing and still claim the rewards of a participating player. Castle Wars freeloading is similar to Soul Wars freeloading before the update. Freeloaders are not as common there, because the only reward is untradeable armour, however due to the fact that the trimmed completionist's cape requires approximately 4000 played games, more players are doing it.

Some players seek to gain Dungeoneering experience and tokens without actually contributing to the party. They may stand around in the base room doing nothing, or run around grabbing and hoarding supplies without helping with any sort of combat. One particular way to freeload is to log out at the beginning of a dungeon, then return near or at its end. This method grants full Dungeoneering experience and tokens for completing the dungeon, despite having not done any work.

However, freeloading in Dungeoneering is difficult to get away with, as the rest of the team can choose to kick the freeloading player from the dungeon, at which point they will receive little to no experience. Most Dungeoneering teams will not tolerate players who do not help in some fashion, and will kick offenders before the dungeon's end.

Some players may create a team of four players and "sell" freeloading to others who do not wish to play, whereby the player pays to sit in the base whilst the other players complete the dungeon.

Freeloading is often frowned upon in non-combat Stealing Creation clans. Freeloading generally consists of a player gathering sacred clay deposited at the base by other players, before refining it and returning the finished goods to the base. This allows them to increase their score with relatively low effort. This is often frowned upon as players who freeload are not helping to deplete remaining clay stocks which in turn prevents the game from ending quickly. Freeloading could also be inactivity or a lack of contribution to collecting the lower tier sacred clay towards the end of round. This also slows down games and therefore is often discouraged. Freeloading is only really an issue in non combat clans as they aim to end the round before the timer is up.

On world 58, the official server for the Blast Furnace minigame, players training Smithing work together to operate the furnace and smelt ores into bars. However, there are almost always players who load their ores onto the conveyor belt and then stand around, doing nothing and waiting for other players to run the conveyor belt, fuel the stove, operate the pump, and cool the bars. In contrast to other activities, players who freeload at the Blast Furnace do not harm the activity or prevent other players from training. However, when few players are contributing and many players are freeloading, the latter group can still be a source of frustration for the contributing players.

While most freeloading occurs in the above activities, other activities, such as Trouble Brewing, have an increasing problem with freeloaders (many of which have started playing these activities after the activity bar updates).