From the RuneScape Wiki, the wiki for all things RuneScape
(Redirected from Frank (Horsemen Clan))
Jump to: navigation, search

Frank is one of the five founders of a clan known as The Horsemen, and the only known mortal member of it. He is only a member of the clan because Death and the other three horsemen of the apocalypse needed a fifth person to found a clan and Frank happened to be nearby at the time. He is good friends with Death, and helps out with his duties when he is absent or busy. 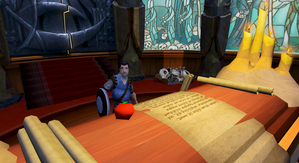 During the Missing, Presumed Death quest, he replaces the absent Death inside his office, serving as death tutor, master of the Soul Reaper distraction and diversion and the place to reclaim items on death. Like Death himself, he provides Soul Reaper tasks, gives access to the Soul Reaper reward shop, and can be used to change loot beam settings. He also replaced Death during the Gauntlet of Souls Hallowe'en event.

He and his pet chicken Horses also featured in the Deathcon II Hallowe'en event, where he invited players to The Horsemen's Citadel, and tasked them with getting the firework on the roof of the clan keep working correctly.

During the 2018 Hallowe'en event, Frank replaced Death inside his office. 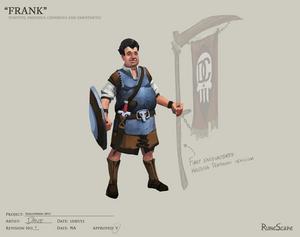 The update history project is a work-in-progress – not all updates to this topic may be covered below. See here for how to help out!
Retrieved from ‘https://runescape.wiki/w/Frank_(The_Horsemen)?oldid=35362622’
Categories:
Hidden categories: