From the RuneScape Wiki, the wiki for all things RuneScape
Jump to: navigation, search
Forums: Yew Grove > We are now Jagex-Approved

After many years of battling with Jagex and the Fansite System, today we were moved to the "Jagex-Approved" list in the fansite tier. Relevant information about the tier system and the fansites involved can be found here.

I've not received any information on the badge associated with Jagex-Approved sites. In fact the email I sent a month ago went unanswered and it appears that my wish to have us named anything but RuneWiki was silently declined.

Anyway, just wanted to let the community know where we currently stand. Also I learned that we became approved from a random post on reddit congratulating us.

Comment - We should change our name to RuneWiki so Jagex start calling us something else.

Well, they call their own wiki "The RuneScape Wiki, the wiki for all things Runescape," or RS Wiki for short. Maybe we could try to make them call this site "The Original RS Wiki," but I won't stop breathing. --Saftzie (talk) 20:53, January 7, 2015 (UTC)

Can we rename ourselves to RuneWikiZone?

Extreme bukkit support for what should have happened years ago. Yay. Lol at the name thing though. Ajraddatz (Talk) 22:31, January 7, 2015 (UTC)

yush I'm surprised Mod Infinity isn't trying to shut us down or completely screw our reputation with fake evidence to convince Mod Matthe to not make us a fansite.  ChaoticShadow

meh - While I can see why this should be an accomplishment, after reading through the incident above and generally following our interactions with Jagex, I don't think this matters in the slighest bit unless the situation Helm mentioned happens. Regardless, I think this is a good excuse to congratulate all our editors for being a part of what I (and many others as far as I can tell) consider to be the most useful RuneScape related website out there! Cheers, bad_fetustalk 00:54, January 9, 2015 (UTC)

Comment - It has taken awhile and while this was meant to have happened last month, it's good that the change has finally occurred. I don't see a point in adding the badge that Mod MattHe wanted to send to us unless we wanted to place it in as a footnote into the RuneScape:About page. I would have thought the name placed would have been the Unofficial RuneScape Wiki. For myself though, calling this site the RuneWiki is probably better than saying the RuneScape Wikia. It's not like they'll request anything big anyhow.

The last time Jagex requested anything of us was almost five years ago; the removal of the Jagex Staff Portal article. Outside of any articles of that nature, I doubt anything major would be requested of us. As we strive to always remain a neutral party in articles, as per policy dictation, we will still retain our editing as it has been. Ryan PM 02:21, January 9, 2015 (UTC)

yay - That name thing made me laugh too hard, btw.

Comment - Jagex should have gone with 'Rune14Wiki', I think. But yay. It took a while.

Oppose - Jagex has obviously violated RS:UTP for ignoring us so long. 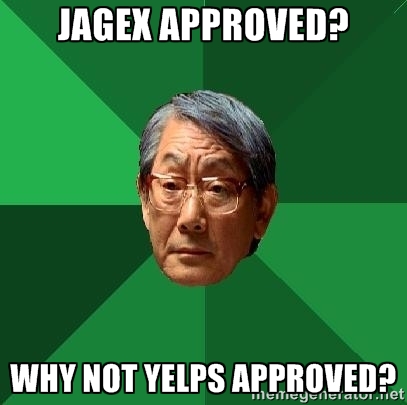 Because we did not pay enough money to afford the Yelps Approved (tm) package.

meh - Did we ask to be Official or did they just give it to us?

They just gave it to us, after previously stating that we would not become official no matter what.

Sounds just like the Jagex we all know and love.