From the RuneScape Wiki, the wiki for all things RuneScape
Jump to navigation Jump to search
Forums: Yew Grove > Tools 'n Tips

In this episode of documenting even more item info: tooltips. While tooltips for i.e. worn equipment have been around for a while and generally didn't warrant documenting as we already had those stats in the articles, Shauny's TAPP project and many subsequent ninja & content updates introduced significant amount of tooltips for a wide variety of items. Given we already include things like examine & destroy texts, it seems reasonable to document the tooltips as well. However many of them, especially for skilling outfits and potions, are pretty lengthy and would inflate the infobox considerably. For this reason it's probably better to include them in either dedicated prose section, a (data)box or through some other means - I'm open to suggestions. Another thing to consider is how to deal with dynamic information - some tooltips include numbers changing depending on the player's levels or other conditions, and then we obviously have amounts of charges or time left, invention perks, stored essence/runes/ammo and so on. I've included a possible solution in mockups below (the [?] tooltips).

For reference, a collection of various examples of tooltips, from short to obnoxiously long. (expand to see): 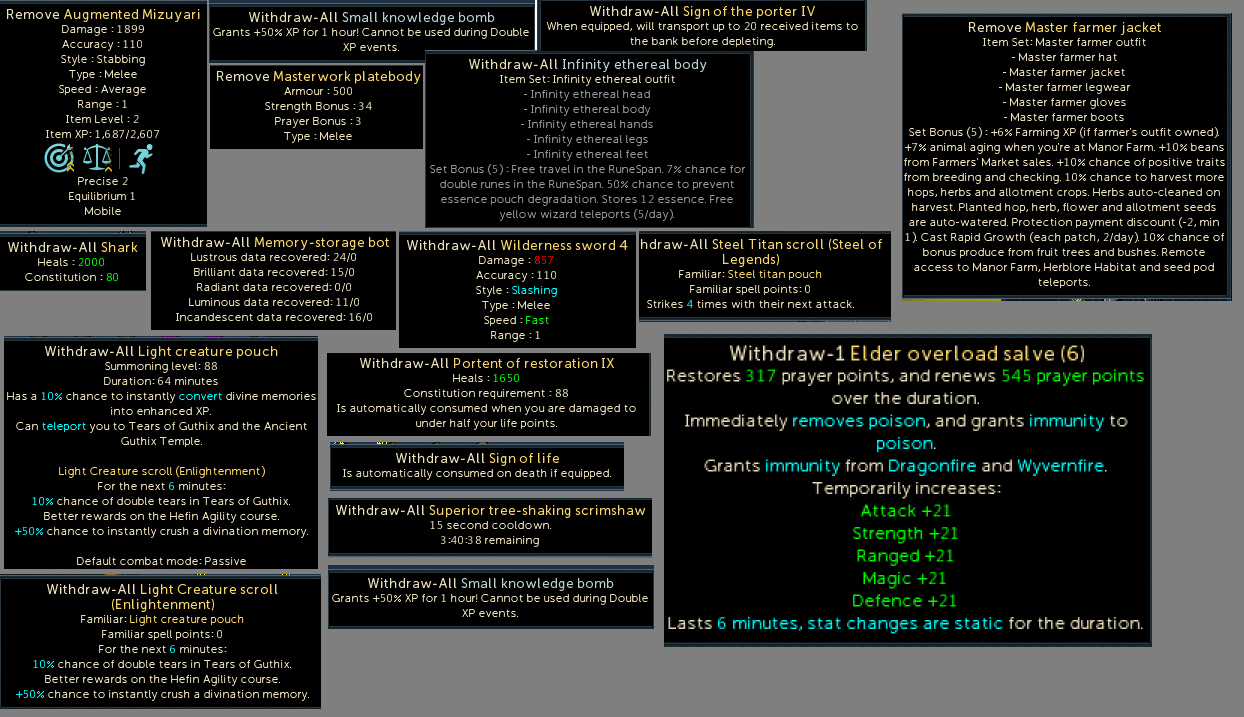 I'm aware they probably don't look visually appealing for now, just wanted to showcase one possible implementation. We can also just put them in a dedicated "Tooltip" section in prose somewhere towards the bottom of the article. Unfortunately some of those look pretty bad even in game (see master farmer outfit on the pic) and there isn't much we can do about that on the wiki, assuming we want to keep formatting the same. Documenting the tooltips isn't that important from gameplay perspective as all the information is usually already included in the articles, it's mostly a matter of covering this aspect of the game the same way we do with other types of text. One major consideraton is obviously the scope of the project - every piece of equipment, potion, Summoning pouch & scroll and many more. More complex tooltips cannot be obtained easily from the cache, so it will require gradual, manual work. Mariobaryla (talk) 00:03, 20 August 2022 (UTC)

Comment - I'm not really loving this unless there's a better way to represent them? Do we have any idea how many are universal vs. affected by the player?

Support/Idea - I like the idea overall, but my concern is about inflating the page. I am unsure about putting it as a prose section. Maybe there could be something like a link in the infobox that, when hovered (desktop) shows the tooltip, just like hovering the item in game? (On mobile, tapping said link would exapnd and show the game-styled tooltip, taping again to collapse). Just an idea.

Comment/Support idea - While I think the idea to document the tooltips would be worthwhile, I think some thought needs to go into implentation and how this would look. As you have them in your proposal looks not good.