From the RuneScape Wiki, the wiki for all things RuneScape
Jump to: navigation, search
Forums: Yew Grove > Standards for new pages created from game cache

I am proposing some standards for the pages we make based off the game config ahead of the content being released. Typically this is for items, particularly ones that are part of upcoming Treasure Hunter promotions.

1. Don't a release date to infobox before the content is officially added to the game/obtainable per Forum: Release date clarification. This is the existing standard for pages about future content on the wiki: it makes it clear to the reader that something is not yet released.

2. Use {{Nonexistence}} rather than {{Future}} for pages created from this source. Although things from the cache frequently go on to make it into the game, there are things which are not released or are delayed or altered in some way. I think that it is important to indicate that the page's content may not be released using the {{Nonexistence}} template rather than implying it definitely will appear in game with {{Future}}.

It would also make maintaining the accuracy of the Future and Nonexistent content categories easier, since we do not get official confirmation when things from the cache are cancelled or postponed, to avoid using {{future}} and then having these pages remain in the Future content category when the content is most likely not going to be released. {{nonexistence}} already implies that the page's subject may be cancelled so can remain on a page indefinitely and accurately reflect that release may not happen.

Strong oppose 2 - The fact that items appear in the cache generally gives it a good chance of appearing in game. The future template already implies that the item might not be properly released in that, with according to our policies, it says the article is subject to change. Your proposal muddles the line between the future and nonexistence templates. If something has a chance of not being released, then, by your proposed logic, everything unreleased should have the nonexistence template. The future template has never been a label that means "This will definitely appear in game." Literally half its purpose is suggesting the exact opposite.

Items that are found via cache have the highest chance of being released, because if they are added to the config, it means time was spent developing it. It makes more sense to have a time after which we can consider an item to be scrapped. Having an article "indefinitely [accurate]" is nothing more than sheer laziness. Plus, I already gave you User:IsobelJ/FU as a means of tracking activity of articles on unreleased content. MolMan 19:40, May 17, 2016 (UTC)

Even stronger oppose - I forgot the best part: This discussion started over the lava lanterns. Not only has a Treasure Hunter item not been released, but the information about the promotion itself is in the cache. This includes, above all, the start date of the promotion. In this case, it's 26 May. MolMan 20:07, May 17, 2016 (UTC)

Support both - though instead of not putting the release date we could block it out with <!--[[27 May]] [[2016]]--> and just remove those when it gets released. Should we make exceptions such as stuff publicly announced, though?

Comment - I'm well aware if you place nonexistence tag, someone will then take a picture of it and post on social media on release claiming wiki is wrong/idiots/retarded/etc. instead of changing it themselves. Similar for release being gone. A way to encourage people to remove the tag themselves would be nice. --Jlun2 (talk) 19:44, May 17, 2016 (UTC)

Oppose All - Per Mol. The pages I create are gained through the API and not through sifting around the cache. This clearly indicates that they are in the game and I rather prefer having the release date it was added to the game, obtainable or not. If we look at the previous thread on release dates, you should notice that things would have to obviously have their release dates changes like the Monkey skull since it wasn't possible for players to get ahold of for years!

The nonexistence template is fine to replace the future template if, and only if, the item in question hasn't been obtained for many months later. Look at the history on the Nearly boiled egg and Ruined essence from Mod Deg's Trading Sequence. Surely you would change it if thought that it wasn't obtainable until early 2015. Regardless of the previous thread, I will always put in the game update and date it was added to the game if I am creating the article. You can remove it all you want later if you feel that the term 'Release Date' is the same thing as 'Obtainability Date' when things like the gavel were time locked without bugs for many months after it was added to the game. Ryan PM 20:30, May 17, 2016 (UTC)

If something has made it into the game cache, nonexistence is not the right template to use, period. How about we think outside the box and have a template (that would replace {{Future}} and {{Nonexistence}} for this purpose) that says something along the lines of "This item was added to the game config on [date]. It may be made available shortly, or may be scrapped." This could apply not only to items put in the config at updates and released later in the week, but also to things like the eye of the mage which is technically in the game config. ʞooɔ 21:21, May 17, 2016 (UTC)

+1 for new template for this particulair purpose.

I like the idea of a separate template for these sources - things from the cache, config, API, appearing in Grand Exchange/Quick Chat or whatever. Could we make it more general then just being for items? For example a template like this could have been useful for showing how we happened to know what items were needed for Memorial to the Myreque before they were stated in game.

Would adding the date to a template like this be helpful? If we were using a template more generally it could be that information is based on more than one addition to the cache occurring on different dates. For the item pages, there doesn't appear to be a lot of information to write on the page apart from saying it was added to the config on x date. Would having this in a template make the article's text redundant for these pages? 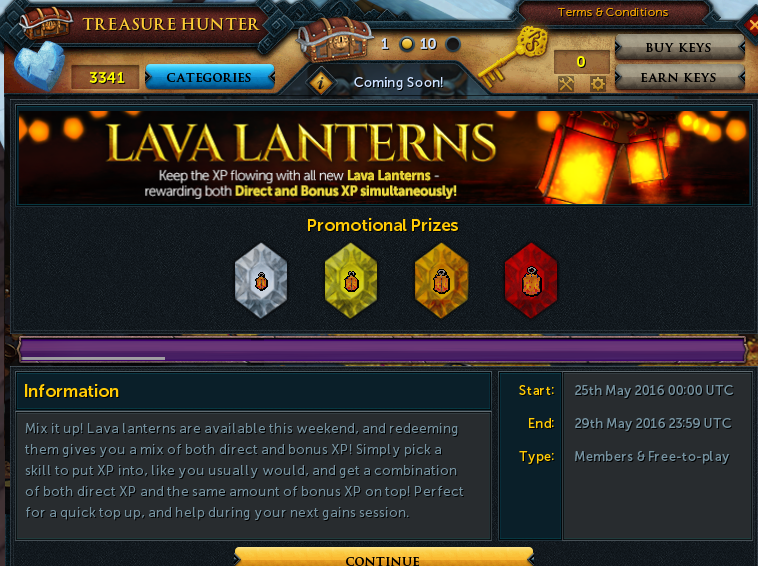 I didn't disagree with you about the promotion being released. I also don't see how this negates it being worthwhile to have some standards for these pages.

Comment - I just realized something. Right now, we're depending on User:Fearthe1337's NXT rips for sprites of new items. However, he's busy at the moment. Is there any policy of uploading sprites for future content? Are we supposed to upload from cache (which bases on Java), but tag it as such? Or do we just wait until someone with amazing graphics card uploads them from NXT? It's an issue, especially with how we don't even have a good non-GE sprite of Linza's set. --Jlun2 (talk) 10:20, May 27, 2016 (UTC)

Closed - There is no consensus to replace Future with Nonexistence as a matter of policy. However, if people wish to, they can create a new template to place on articles specifically for cache-obtained items. --LiquidTalk 06:56, May 31, 2016 (UTC)