From the RuneScape Wiki, the wiki for all things RuneScape
Jump to: navigation, search
Forums: Yew Grove > Revisiting Compass and Scan Clue images

The topic of Compass clue images has been brought up before here on Yew Grove: Forum:Remove compass images. With the new project of Interactive Maps, I would like to revisit the need for these images. It was brought up that the compass images are useful for some to understand where they might need to stand, or to get a rough idea where in an area they might need to go. This is perfectly valid and understandable. With the advent of the interactive maps, and the current One Small Wiki Favour going on to add interactive map coords for these locations, this begs the question whether these hundreds of images are still needed. I would argue that an interactive minimap is just as effective as an in-game image of the location. Remember, you don't need to know the exact spot. The compass or scan UI will let you know where to stand exactly, as long as you're near enough.

This also raises the issue of maintenance. Many of the images on the compass page are/were out of date. This is largely due to graphical updates or reworks, or in old cases the interface has been updated. I first noticed this with the Catherby clue images on the simple clues page. Catherby was reworked in 2016, and almost all images in the town were out of date, almost 4 years later. Similarly some of the compass clue images in Burthorpe and Taverly (towns that get updated almost every other year), were also out of date. Not to mention half the Draynor images (1, 2, 3, 4, 5) and almost all of the Wilderness images (ex: 1, 2, 3, 4) were last updated in 2014 or older. I've since updated the Draynor images, but haven't ventured into the Wilderness yet.

If these images were replaced with interactive maps, almost all of the maintenance work would be reduced to almost zero. Rather than retaking in-game images, we would just need to update individual coordinates. We would need to decide whether to have an individual row, with a visible map for every location, or to have a summary map per section. I have done quick mock-ups of each. Something that be seen immediately is that the map icons clutter up the maps for cities and towns. If that feature is added to hide icons, it would be easier to identify locations. It may be that we would wait for this feature before making the transition to interactive maps. I personally prefer the section maps. Not only does it show all clue solutions in one location, it requires even less maintenance as there is no text involved to describe where the location is.

Mock up of Asgarnia section maps

Mock up of Taverly individual maps

I've focused this discussion mainly on Compass clues, simply because a lot of images are or were out of date and require work. However, this discussion can extend to other Treasure Trail clue types such as Scans. The Scans page is fortunate to have largely up-to-date images, and non-interactive image of the clue locations in the area. It can be argued that it doesn't need work, so don't touch it. However we would be deferring the maintenance until the next graphical rework, and the work to move to interactive maps would be done eventually. Additionally, I would argue that interactive maps should not replace images for Simple clues, since a lot of them involve searching the environment. Images are handy for that. Likewise with Coordinate clues, knowing the exact spot to stand is extremely useful and images help portray exactly where to be.

I would like to hear the community's thoughts on this, especially because there are some open questions. For instance, how would in-game images be relevant when we have accurate interactive maps? Do we still need images of the exact location to help us get there, maybe by using landmarks in the image? Furthermore, we will need to think about how this will impact wiki traffic, such as will users be turned off by the move from images to maps, and will the page take longer/shorter time to load? I know that a lot of people have trouble loading the full TT guide, will this solve it?

Comment - It should also be noted that there are certain cases where the interactive maps are (currently?) not nearly as detailed as the in-game minimap due to extra game object rendering techniques that go beyond displaying the base map tiles. Side-by-side example: 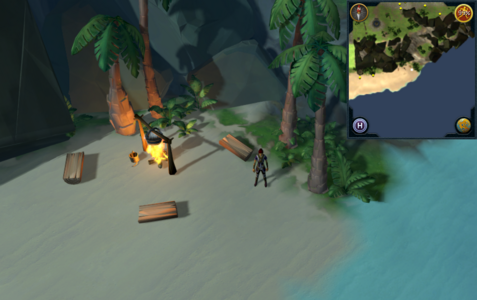 I'm not suggesting that this example is the worst case or that it's even a case where the intmap is unusable... just wanted to point out there are some cases where potentially valuable visual information could be lost when removing the screenshot. MrDew (talk) 22:34, 19 March 2020 (UTC)

Definitely agree with you here that the interactive maps still have room to improve - especially with detail in The Arc. That being said, the compass clues and scan clues just need for you to be in the general vicinity. You can tell from the interactive map in this scenario (even at such a low detail) that it's on the east side of the beach. Great, run to the east side of the beach on Aminishi and boom you can follow the compass to exactly where you need to go. The question here would be if this is a regression in user experience. For cases like these, it likely is. This would support the fact that we would wait until areas are detailed enough on the interactive maps. Sir Veylantz (talk) 22:47, 19 March 2020 (UTC)

Mild oppose on pictures Sometimes even when the map is accurate, it's quite difficult to find where to stand for some clues. I've found an ingame picture like "character is standing 1 tile west of the fire" quite useful. For specific examples of these clues, think of west of gnome village, karamja divination spot etc. But if we're going to continue using these images, it should be without a minimap on them. As for hiding icons, support for hiding icons. How would you envision this, exactly? Should the map template have a parameter whether to hide icons? Should all maps have a toggle, and if so, a global preference that remembers this? As for the map tiles without icons, I have them already (they're an intermediate step in rendering the map with icons), we would only need to implement a toggle (I have no idea how much work that would be). That is assuming it's either all or none icons, letting users pick which icons to display would be pretty complicated. Mejrs (talk) 09:50, 20 March 2020 (UTC)

Comment - Just to clarify, the actual maps on the pages do show the details when you click the pin, and they use an actual pin icon that makes it easier to tell where the point actually is. They look like this (click the maplink):

Easy to change but we really don't want to do this since loading a lot of interactive maps on 1 page is not a good idea. (Very browser resource intensive, also lots of assets to load)

Would this be alleviated by using the Kartographer's Static Frame instead of the interactive Frame that (I think) we are using? For reference on what I mean, see the MediaWiki Kartographer extension documentation. They use examples of Static Frames, where the map must be clicked on before you can interact with it. Sir Veylantz (talk) 22:20, 24 March 2020 (UTC)

Closed - there is consensus to keep the in-game images of clue locations for now and use them in conjunction with the interactive maps. The maps should use the "pointer" icon rather than the previously used clue scrolls icon.