From the RuneScape Wiki, the wiki for all things RuneScape
Jump to: navigation, search
Forums: Yew Grove > Project view

with the orb of Oculus released a new project for the wiki can be introduced here my idea, on all building articles we get a shot of the front/left/right (any angle to show what place it is) of the building here a preview i got recently 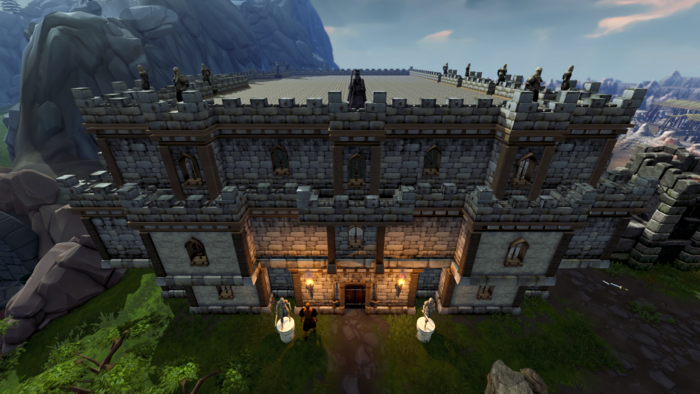 so what do you think of doing stuff like this all over the wiki, the only name i can come up with is...

The Building Block Project, do what you think of this all over runescape wiki?(no on every page but on important pages)

Neutral - I don't really think that it's all that important to have a front view of every building, but it could look impressive. Awesome job on that particular picture though, I see that it has been nominated as a featured image. I'm a regular user and I approve this message.  TLUL Talk - Contribs 20:15, February 17, 2010 (UTC)

Question - I know there are many buildings with multiple entrances like Varrock west bank. How would we determine which side to is actually the front and which side to take the image?

Reply - just get the best angle to show the place =)--

Oppose - We'll get to a point when theres just too many images and people will stop visiting because of the lag on each page :/ Swiz Talk Review Me 21:43, February 17, 2010 (UTC)

It may or may not happen. Some computers have compatibility problems when viewing a laggy page, that's why it's not a good idea.

Oppose - I think that if you want to replace an image on a page for a better and nicer view that's fine, but to give each and every page a picture...per swiz.

Comment - I mostly support, but truly, I think this discussion is unnecessary and am extremely surprised by the opposes above. We don't have articles about each and every building in the game, although we are supposed to make articles as appealing and informative as possible. I have been going from city to city trying to improve the article, and update it to a great standard. I usually get a screenshot of every point of interest listed. Without pictures, how would you know what kind of place it is? The pictures add theme and attractiveness to the page. It might make the page take longer to load, but the text is loaded before images. These articles shouldn't take long to load at all, even on a fairly crappy connection. If someone is still using dialup, they shouldn't have the need to use the wiki because I don't know how in God's name they would play RuneScape. Any chance to improve the quality of our articles should be pounced at. Chicken7 >talk 07:11, February 18, 2010 (UTC)

On a recent trip, I traveled to a forsaken place that only had dailup (shudder I know, don't worry it'll be ok). I was able to still play RS (on low SD) and browse the wiki but I didn't even try editing. Anyway, the images we coming up fine for me, just the typical slowness you'd expect from dialup. I'm happy to be back to my wifi, whew. Anyway, I guess my roundabout point is, that if you're able to play RS, you probably won't be lagged by one high detail screenie on an article. Sorry if I scared anyone with my tale of dailup, btw it was AOL, lol.

But he's asking for 3 images of the same building just at different angles, surely that'll cause pages to load slowly. Swiz Talk Review Me 10:21, February 18, 2010 (UTC)

True, I would think just one image would be enough. 3 would look bad in the article IMO.

Most featured articles on Wikipedia are full of huuuuge photographs. We are talking about a few images of a video game, where graphics are nothing compared to real life. Although, I must've missed his point about multiple screenshots from different angles, and I would probably oppose that unless if both of the screenshots showed two very different things. Chicken7 >talk 11:18, February 18, 2010 (UTC)

Delay - I love the idea of having beautiful, Orbed screenshots on the pages, but if we replace older pictures with newer ones first, we may get an idea of whether there are any issues to be worked out, what the upside and downside amount to. If there is a huge positive response, and complaints about lagg are few to none, then this idea becomes far easier for me to support. --TheLastWordSword 15:30, February 18, 2010 (UTC)


Oppose - Per others. As for one, I cannot load the image of the Warrior's Guild on this topic. Reason? I am utilizing the EDGE Network on my iPhone. It causes unbelievable lag, prevents me from editing many times a day, and restricts those with an even poorer connections. As well, not every image would have to be updated nor should they be. Considering this, I don't see why we must create a project for this when people do it based on RS:BB. The time which it takes me to load even a much smaller 100kb picture is astonishing on slow connections, let alone some of our 2mb screen captures. I'll never support complete usage of the Machinima toy. Ryan PM 16:02, February 18, 2010 (UTC)

Support - because the images are great.

Comment on concerns of lag - I think it would be possible to make a script *cough* Quarenon should do it *cough* that would allow you to only display images under a certain filesize. ShinyUnown T | C | E 21:06, February 18, 2010 (UTC)
Comment - Oh my gawd! You're trying to edit on an iPhone?? That's just crazy! --- The "Preferences/Files" tab can be used to change incoming file sizes, but it doesn't look all that useful for anything but thumbnails when it comes to Mainspace pages. This would be a pain to update, wouldn't it? --TheLastWordSword 16:27, February 19, 2010 (UTC)

It doesn't change anything on the iPhone. In-fact, it turns most of all Wiki's into the awful mobile version where I loose my Monaco custom settings. As well, it is a pain as it affects my laptop and everything else. Ryan PM 18:49, February 21, 2010 (UTC)