From the RuneScape Wiki, the wiki for all things RuneScape
Jump to: navigation, search
Forums: Yew Grove > Members only content in F2P worlds

I've noticed there are certain NPCs that appear in F2P worlds, but can not be interacted with unless the player is logged into a P2P world. For example, Monk of Entrana appears on F2P worlds at Port Sarim, but attempting to talk with them will result in a message stating that the player needs to log into a members world. 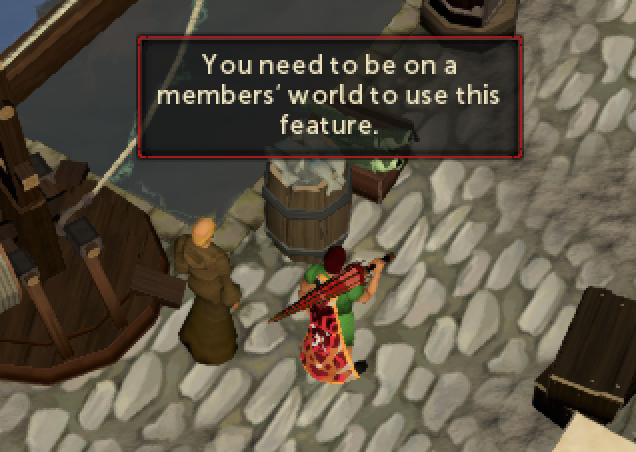 There are a few possibilities:

Proposal: Members NPCs that exist in F2P worlds but can not be interacted with should be members=No.

This issue also comes up with items (for example, astral runes can be obtained in F2P worlds via Shooting Star, but nothing can be done with them), but I'm pretty sure most of you would agree that they should be members=Yes because any P2P item can be brought into F2P worlds.

Support - Jagex clearly have the option to enable an NPC in either F2P or P2P worlds (presumably for advertising). If they exist in a F2P world then I think it should be members=No. Haidro

Oppose - I disagree actually. If an NPC is visible in a free to play world but you can't do any form of interaction with them unless you're a member, they are a members only NPC. If we start stating that these NPCs are not members only, we risk confusing people. It's far more likely someone will check a wiki page thinking "Can I interact with this NPC in free to play" rather than "Are they visible in free to play". So, I think that in terms of your scenarios, ALL of those scenarios should be listed as a members only NPC. jayden 09:43, 18 April 2020 (UTC)

It's also interesting that for your items example (astral runes), you think we should call them mmebers only objects because you can't interact with them in F2P despite being able to obtain them in F2P. Isn't that in contrast to what you're proposing for NPCs? You think NPCs that are "obtainable"/visible in F2P but can't be interacted with unless you're a member should be classed as F2P NPCs? That doesn't seem very consistent jayden 09:47, 18 April 2020 (UTC)

I treated items differently because any P2P item can be taken into F2P. There's something odd going on here with NPCs where they're purposely put in F2P worlds. Haidro

Oppo taco - Agree with Jayden here: describing an NPC/item/object that explicitly says it is only available for members, as members = No is confusing to our readers. I'd also add that the prose explaining its members-ness (in weird cases like this) is more important than the parameter value. ʞooɔ 09:48, 18 April 2020 (UTC)

Category + Text - I agree that changing the infobox to read "no" would be misleading to users, but it's probably worth a mention. I'd be fine with a category like Category:Membership-restricted NPCs visible in free-to-play servers (but not that since that's a mouthful) and a mention in trivia that they can be seen and have limited interactions (or not) in F2P worlds, despite being members content. If there's any special dialogue, we can just put it in the transcript section. ɳex undique 18:14, 22 April 2020 (UTC)

I think if the NPC becomes interactable to the point that there's special dialogue then it should be members=No. One example is Da Vinci. Kinda still agree that it could be confusing though...ß Haidro

Oppose - Per Jayden. I'm fine with a category + prose for the distinction, but making this parameter would just end up confusing the end reader, as the proposed definition is correct in a technical, but not a functional, sense.

Are infobox options limited to just yes/no? - Why can't we use members=yes for explicitly members only content, members=no for explicitly free to play content, and have a few shades of grey in the middle? Like members=Visible to F2P for stuff that is visible but has the generic "You must be on a members world" popup and members=Minimally interactable for cases like Da Vinci? --LiquidTalk 19:30, 24 April 2020 (UTC)

Comment- I like Liquid's suggestion in this instance, the wording for the second one may need to be tweaked :) BetsanTalk 16:16, 26 April 2020 (UTC)

Oppose - While it may be true that some NPCs with members-only functions are present in F2P worlds, that does not make them F2P NPCs. Take farming patches for example. There are farming patches in Falador, Lumbrodge, Varrock, etc that show up on F2P worlds. When you interact with them it tells you they're members only. We list farming patches as members-only because while they might be physically present in an F2P world, their functions are absent. Is this not the same thing? Physically the NPCs exist, but functionally they're absent. Same thing with summoning obilisks. They're present but non-functional, and we list those as members-only too.

Oppose - Per others, I think it's misleading to mark them as f2p, but I'd be ok with a specific category for members npcs visible in f2p.

Since this discussion is about content and not just NPCs, why stop there? We could include things like farming patches and obilisks in that category too.

Support, with tweaks - I also like Liquid's suggestion, but propose that we keep it simple. The way I see it, there are different "levels" of membership:

I think that if a F2P user was reading the wiki to find out if something is members content, having 2 be members=yes would make sense, since it is not F2P content, but 3 be a special category would be helpful since they aren't F2P content, but saying that it's members content, while not misleading, would be not as helpful as some kind of "limited" status. This would extend to all member's content that have special behaviour on f2p worlds. I think this keeps a right balance between cramming too much information in a place where most people won't care, and being helpful to a subset of the reader population whilst remaining accurate. I haven't looked at the template to see how this is possible, so some work may be needed there. Elkswampdog (talk) 02:38, 14 May 2020 (UTC)

Example three, to me, is a massive gray area. For that I feel it would be more appropriate to have a second infobox or page for the F2P variant so that those players can be taken to exactly what they're looking for instead of having it mingle with the members-only content.

I agree that 3 is a grey area; it really boils down to how much content there is for a f2p, if it's just a few lines of dialogue then "limited" is good. So I guess we subdivide 3 into (broadly speaking)

I'd much rather use a 2nd param, it's more intuitive, saves editing a bunch of pages, and makes it easier to keep the property as boolean. I think, if anything, just adding a visf2p=yes or something like that is the way to go.

Closed - There is not consensus to change the current use of the members parameter for content that exists in F2P worlds but can not be interacted with. There is consensus to implement a second infobox parameter and/or category for members' content that is visible in F2P and to explain the situation in the article.