No one other than Mol answered my call to arms last year. And I'm pretty sure the two he made were sarcastic. Looking at the forum archives, there's no thread with a creative title.

Comment - Bonus points to anyone who actually manages to make a serious proposal with a cool title. --LiquidTalk 20:57, February 9, 2017 (UTC)

can we not - Mol's ideas were stupid and trolly.

I'm going to say this very plainly, but I can't tell if you're being serious at all with this thread (I hated those silly titles...).

no - because you ignored ignored mentioning my totally great forum name I made just for you in this thread. Bad helm. Pls go.

Oppose - Back to being a noob I see. If you wanna make titles interesting then do so, but it should still remain a header for the subject.

Comment - ...please. That one with the three bombs is an atrocious title because good luck finding it in any search bar. User_talk:Fswe1 Fswe1 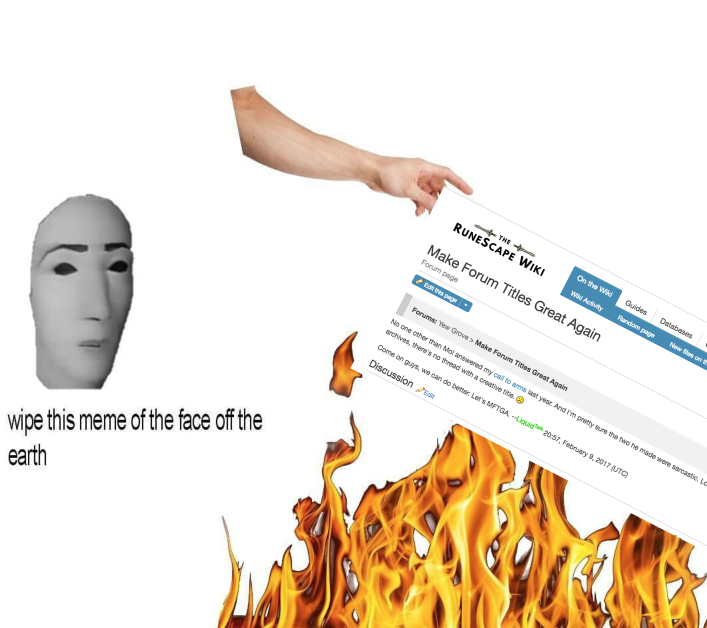 Can I request a closure on somebody else's thread? No? Okay... --

it's time to stop!

Comment - Sorry, but I cannot take anything that consists of "Make ? Great Again" serious. I did think Forum:Return of the Spoilers was clever though.

Oppose - some ideas just need to be exorcised, cremated, and flushed down the ........ while I agree that the titles are overly technical, sometimes THAT is what makes them clear. It's not easy for some of us to come up creative titles that ALSO explain what we're trying to get across. --Deltaslug (talk) 04:21, February 15, 2017 (UTC)