From the RuneScape Wiki, the wiki for all things RuneScape
Jump to: navigation, search
Forums: Yew Grove > Make (H) Obama in S:C

For the longest time, I've had no way of referring to our first blackfrican american president except by name. After a very pensive and engaging talk, we came to the conclusion that typing (H) in [[Special:Chat]] should render as

giving us an easily identifiable way to refer to this man. The phrases "Blanket for basa" and "Bracket Llama" have been thrown around recently, and every time they are, I get ready to engage in a civil political conversation, and every time I am disappointed?

Why (H)? Indeed. (H) currently has no legitimate definition. It is recursively defined as "(H) means (H)". But how does this relate to Obama? Isn't it obvious?? His middle name is Hussein. I've actually met Mr. Obama in real life once or twice, and, after becoming sufficiently acquainted with him, he told me:

Pls Mol. Call me Hussein. Or if we become even better friends, I'll let you call me Hussy.

There is no better way to honor this remarkable man than by adding an emote to the onsite chat that is parsed from his middle name. There is a standard of using parentheses (such as (<skill>) for the various skills), so it's best we follow that format.

Support - Why has no one thought of this before --

Support - Sure. Why not?

- I don't want no filthy communists in mah s:c

As said before, (H) is recursively defined and has no useful meaning. If I created a new word, "shuygutliop", that means "shuygutliop", where could I possibly use it while still making sense? MolMan 17:42, August 4, 2014 (UTC)

Suppo't - This will encourage our black community to engage in the wiki more. If we show that we accept all races in the chat with (H), they will be encouraged to upload equipment images in their darker skin tones, giving more contrast to our images.

Oppose - Why can't users that want this customise their chat.js and change it for themselves? Bluefire2Talk edit my sigOil4 I made this 18:27, August 4, 2014 (UTC)

It takes more parsing power and it doesn't always immediately load. [[MediaWiki:Emoticons]] is built into the system, so it's easier, cleaner, and more efficient. This is also not a drastic change, the emote is not used constantly, it can only be used intentionally. MolMan 18:29, August 4, 2014 (UTC)

Immeasurably Strong Oppose - I did not vote for him. Nor did I vote for the other guy. My stubbornness dictates that I cannot support this idea in any shape or form, nor can you impose your imperialistic image on me. However, you are utterly and complete free to do whatever you want on your own personal chat stuff. --Deltaslug (talk) 16:31, August 6, 2014 (UTC)

Support - I doubt ya'll are going to change the (H) to Obama's face. No change at all.

You got that right. Oh, yeah, and Strong Oppose. This is a farce - there are better things to be working on. >_>

Let me be completely frank: this is stupid, like the Konami code we have. Believe me when I say that it's things like this are why I feel humans are stupid. I don't know if anyone noticed, but even though both start with an "A", August 6th and April 1st are different days (ZOMGNOWAI).

I agree; I will boycott this indefinitely by saying (H) in chat and thwarting the parser so it stays in its text form - Dtm's signature emote needs to be preserved as much as possible, for the sake of the chat. It's very popular, to the point where people wanted to ruin its legacy. – Ozank Cx 00:52, August 7, 2014 (UTC)

Don't worry Mol; I hate him because he's a moron, the colour of none of his organs have anything to do with that. :) User_talk:Fswe1 Fswe1

I still support this change. I mean, yeah, it's just a bit of pocket change ;)

Comment - Closed. No more joke threads in the Yew Grove, please. This hasn't been 7 days, but this is not constructive and should be discouraged in the future. The image will stay in the MediaWiki interface page. Ryan PM 23:25, August 7, 2014 (UTC)

Agreed. Currently there's an edit war going on in RuneScape:Emoticons simply due to Cook saying this thread gave consensus: 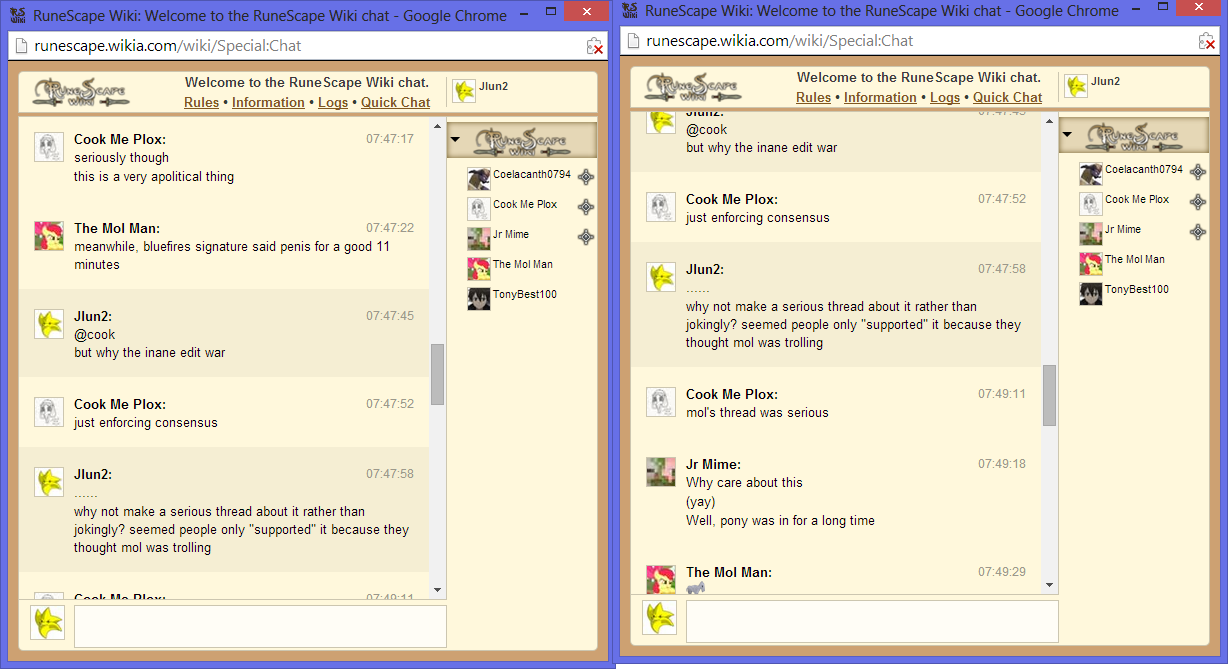 More proof this was done to fuck with DTM: 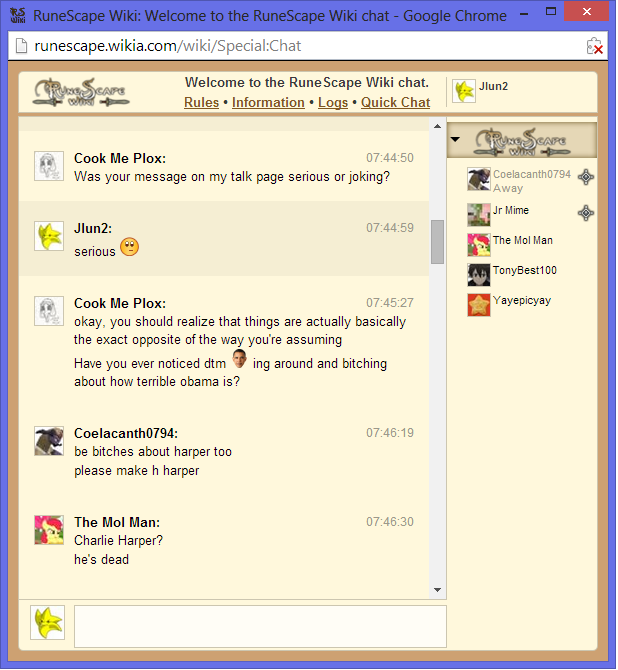