From the RuneScape Wiki, the wiki for all things RuneScape
Jump to: navigation, search
Forums: Yew Grove > Made in Bloom

There is currently no policy for or against the usage of the bloom graphical setting for imagery on this project. It appears to be an unspoken and unwritten rule that one should never use this feature when adding to an article, either as a landscape or equipment image. Bloom can enhance the appearance of items it is properly used on. In the same aspect that we upload NPC imagery with an ideally bright (daystone/midday) skybox as not doing so means it is hard to see the full representation of the article in a file. 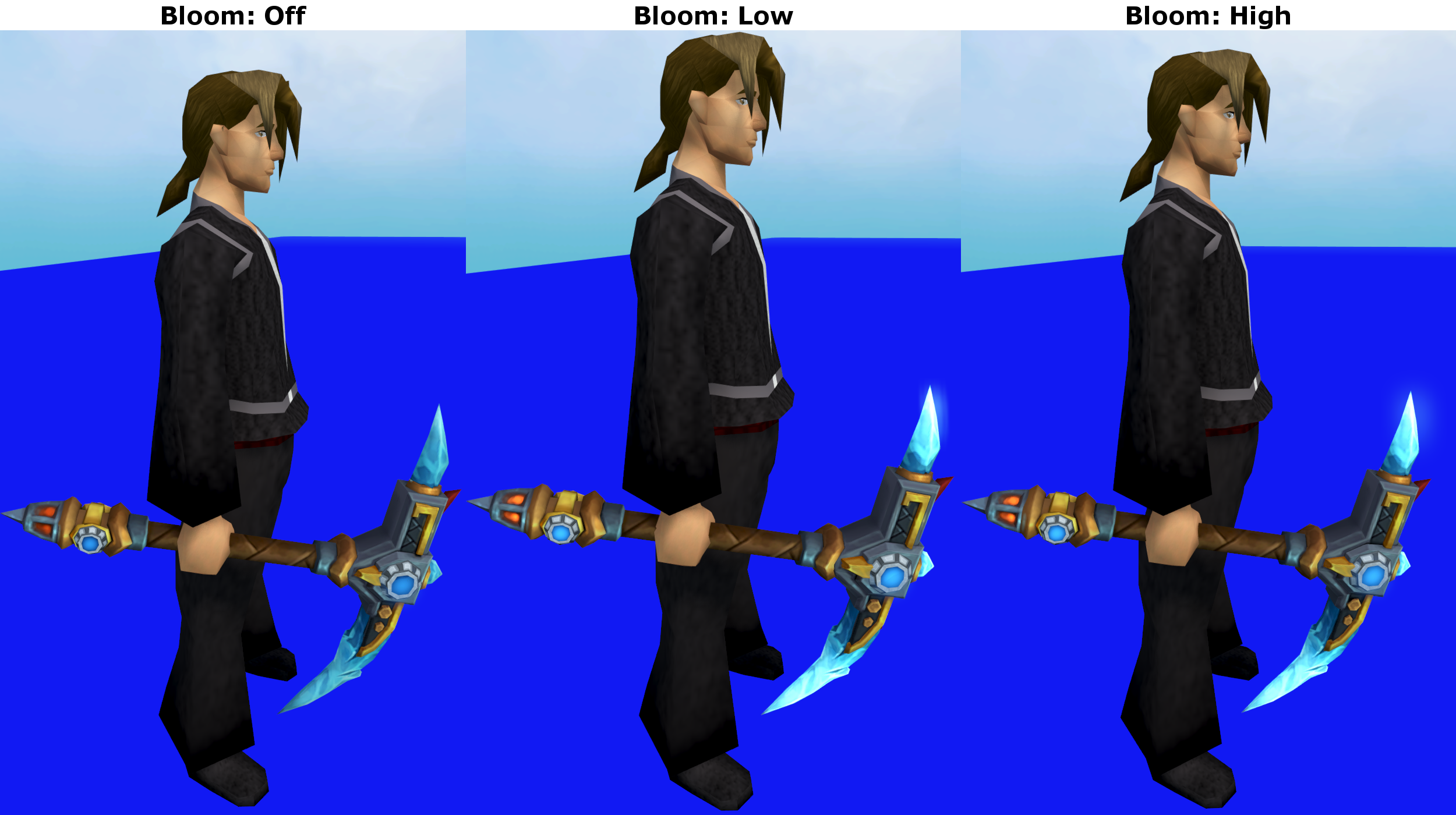 In this instance, you can see it brightens and adds a slight glowing effect on the back of the pickaxe. I would like it to not be prevented from being uploaded and there needs to be a valid purpose in replacing an image besides bloom. I want articles to be fully represented by the file that accompanies it in the way the developer, Jagex, intended it to be seen at the highest quality obtainable in-game with the existing client.

Should this project bar editors from uploading files that have bloom? Should this project avoid bloom because it might mean translucency would be required? There might indeed be locations or NPCs that cannot have a proper image taken when bloom is on, but I would like to stress that if it has bloom on the model that we should attempt to take it as is with a potentially different skybox to lessen the brightness of the overall model as to make the bloom an addition and not a negative to the file.

Comment - I would also like to note that I will always endeavor to use bloom on anything and everything. It was bad in the past, but now it looks perfect. Only thing different now is the addition of godrays in places like Menaphos that, last I checked, could cause some anomilies with trees. I do plan on still replacing the Pickaxe of earth and song and the augmented versions with bloom since they do not detract and that the feature ADDS to the article. - Ryan PM 07:38, 15 November 2018 (UTC)

Another thing, I make no mistake that if it obstructs the subject of the article, I wouldn't upload a file with bloom enabled. However, outright banning the usage of bloom I feel is poor judgement. - Ryan PM 19:23, 15 November 2018 (UTC)

No bloom on pages about specific individual items and objects, bloom on environments- That's a mouthful. In my opinion, bloom should only be used on environment images for aesthetic purposes, such as File:Silvarea.png (not a good example but it shows the kind of image I'm talking about). Using bloom on other images, such as items, NPCs or scenery, often has the result that details of the models are obscured by the glowing effect, or that models appear distorted due to nearby bloom lighting. In the end it's a case-by-case basis, but I'd rather have a standard that disallows bloom than one that allows one.

Comment - This is part of a bigger issue of RS:IMG being completely inadequate in specifying the NXT settings to use for NPC images, DIIs, etc. There's no policy for using bloom, but there's also no policy on whether to have lighting detail on low/high, ambient occlusion, shadows, etc. This issue should be part of a larger thread where we determine, as a community, the exact NXT settings to use for each type of image and possibly even reevalute existing policies like using daystone/midday lighting, because it messes with the color of reflective surfaces like swords (see the last 3 file history revisions of File:Head_thief.png).

While there is no policy, there are guidelines in Help:Editing/Taking images. I think I just based it on what was fairly equivalent to the previous standards for Java images and informal discussion of what people were now using in NXT. The use of midday/daystone was specifically made a policy because some editors did not like the interference of area lighting in NXT.

No bloom on any images - While I agree that some images can look better with bloom on, there are a lot of images where bloom can ruin the image/take away from it. I disagree with the suggestion to do it case-by-case, because with the sheer number of images uploaded, this gets messy really quickly and I'd rather not have a potential debate over every picture that gets uploaded, but rather have a clear guideline. Talk to Kelsey 13:15, 15 November 2018 (UTC)

But there will be debates since not everyone uses the same settings in-game, with or without bloom. No consistency for lighting detail, brightness, AA levels, ambient occlusion and volumetric lighting. I feel that outright preventing showing of the subject in their intended manner can detract from the article. If the case is that it does not enhance the subject of the article, such as the pickaxe. That image is really why I created this thread because it is how it is meant to look. While the model concept looks as it is without bloom, it is more vibrant in-game with bloom enabled. - Ryan PM 19:23, 15 November 2018 (UTC)

Regarding the former, I completely agree, and franky there should be more yew grove threads created for those parameters. As for the latter, like I've said, I agree it look better, but I don't think it's worth the hassle of the negatives that I've pointed out. Sidenote: More vibrant isn't always a positive and I don't think it's a valid argument. Talk to Kelsey 19:28, 15 November 2018 (UTC)

Comment - I feel like we should all be able to be sensible enough to see on a case by case basis which images are good to enable bloom on and which it causes a detriment too. Then again, I've thought this about other things and it has ended up being as messy and counterproductive as Kelsey argues. If it is not possible to compromise then I'd rather have a standard that follows the existing status quo of not having bloom enabled on any images.

Comment - While looking into old threads, I came across Forum:Why don't we use bloom for screen shots? (Pre-EoC 2012) and the implied consensus then was to use common sense. It only took half a decade for bloom to become a useable feature in the game for a larger bit of the playerbase. I don't see this ending with how I imagined it would, but after this we (per Discord in #wiki-rs) should take a more in-depth look at what the ideal settings are for image taking in addition to the updated Skyboxes since we can now have even more variance in image quality with advanced settings. Ideally we'd set specific values based on the default values for earlier mentioned Midday and Daystone. - Ryan PM 09:32, 22 November 2018 (UTC)

Comment - Jagex recently released a new tool that allowed us to specify specifically fine-tune the exact colour and lighting settings with an advanced mode in the Skybox/Filters interface. Would it be possible to create a single guideline with a specific skybox + setting adjustments for taking pictures? Because I think the issue of no policy regarding bloom is related to this. MissLioness (talk) 09:08, 24 November 2018 (UTC)

Closed - The existing status quo is for bloom not to be used on images. There is no consensus to change that here for most type of images; concerns have still been raised about bloom causing details to be obscured on single subject images. There is some support for the idea of allowing environment/location images to be taken with bloom enabled. I conclude that bloom is allowed for environment/location images only, and should be turned off for all other images.