From the RuneScape Wiki, the wiki for all things RuneScape
Jump to: navigation, search
Forums: Yew Grove > Header logo suggestions

So a while ago the topic Forum:Header changes was closed with Liquid saying:

Closed - This has been inactive for a while now. As is typical with these kinds of threads, there is no clear consensus. The current header has some rough consensus in its current form (not including the logo), with the current blue color. Thus, these will be kept. As there is really not enough discussion to deal with the logo, that will stay. If there is strong support for a different logo, that should be addressed in a separate (and specifically only dealing with the logo) thread to help determine consensus. --LiquidTalk 15:07, June 28, 2017 (UTC)

One of my suggestions was replacing the current reduntant logo (Saying RuneScape Wiki + the text RuneScape Wiki) with a smallest and simpler look, like out favicon, like these two:

This would make the header larger, not reduntant and the image would match the current favicon. Maximus Gugu of Armadyl

Support - This is definitely a lot better than our current logo, especially considering that it gets shown at the top of the source editor too and takes up space. I've said before but I'll say it again here - I really don't like the current blue background for the header. If we're wanting to keep it blue, I think it needs to be darker to distinguish it more, like this. The wiki background could also do with an update to be honest, but that's probably a discussion for another time. jayden 13:25, August 23, 2017 (UTC)

Support - I like this much better than the current header.. More compact. -

Support - This is definitely much better than the current banner we have.

Support - Definitely looks better. As for color, i think i like the blue one the most.

Oppose - Just took a look. I kind of prefer the logo, although the current version of the header does require some tweaking. But plain text is rather boring... User_talk:Fswe1 Fswe1

Support - but make it in english tho, you know, a REAL language --

Am I missing a joke somewhere - Seriously, are people supporting a change to the super plain text version over the version with the swords? Wow, so lame. For the record, mega oppose. Degenret01 (talk) 20:53, August 23, 2017 (UTC)

Support - I really like how clean and crisp it looks.

Comment - If this passes, this image here should be used to match the Header coding and positioning. Maximus Gugu of Armadyl

Strong Oppose - It's so bland... The current one is nice and clean regardless. Why fix what isn't broken? Haidro

Oppose - Unfortunately that logo does not scale or look proper on smaller screens.

The scale is something that will be unavoidable with any logo because of Wikia. As far as I know we can’t make JS modifications to the header but maybe it’s something we can fix with CSS? Also, I’d just like to point out the current logo is near enough invisible on the source editor, so it shouldn’t be limited to just this case - we should try to fix that altogether regardless of the logo we are using jayden 10:41, August 24, 2017 (UTC)

----
• If the logo looks like this it can be displayed on the source editor too.

Oppose text-only logo - there are companies that have just wordmarks, but they are a) iconic names, and b) almost always stylized in some way. Neither is the case here, it's just our initials typed and rearranged.

It still needs some kind of iconography like the swords in the current logo. Since we're a "RuneScape encyclopedia", I think we should use an opened book to represent us being a source of knowledge:

It looks cool! Just have to be positioned on the left bottom corner to look nice on the interface along the text. About names and branding, a lot of other companies just use text as their brand and it doesn't need to be stylized, as Microsoft, Jeep, 3M and some others that just use a plain Helvetica text. This is still a logo. Maximus Gugu of Armadyl

It is a nice logo, but it doesn't really represent us. I think the red bookmark or whatever it is at the top left needs to go, for a start. The main issue is that it might be nice to make it more symbolic than just a book with 'RS WIKI' written on it. It doesn't really fit the theme of the game that we cover. Perhaps there could be some vertical-facing swords either side of the text or anything really that'll make it more... RuneScape? jayden 23:19, August 24, 2017 (UTC)

Actually this site is a _wiki_ about a game, not the game site. It doesn't have to be that runescapian and more wikian. Maximus Gugu of Armadyl

I didn't say anywhere that it isn't a wiki about a game. Actually, for that exact reason, we should theme around the game. Lets remove the page background too and replace it with a tiled image of books. Sure, it shows we're a wiki. But it doesn't show we are the RuneScape Wiki. I just took a look through some of the top wikis on Wikia that are based on games. Every single one of them has a logo that is styled on - you guessed it - the game that they cover: 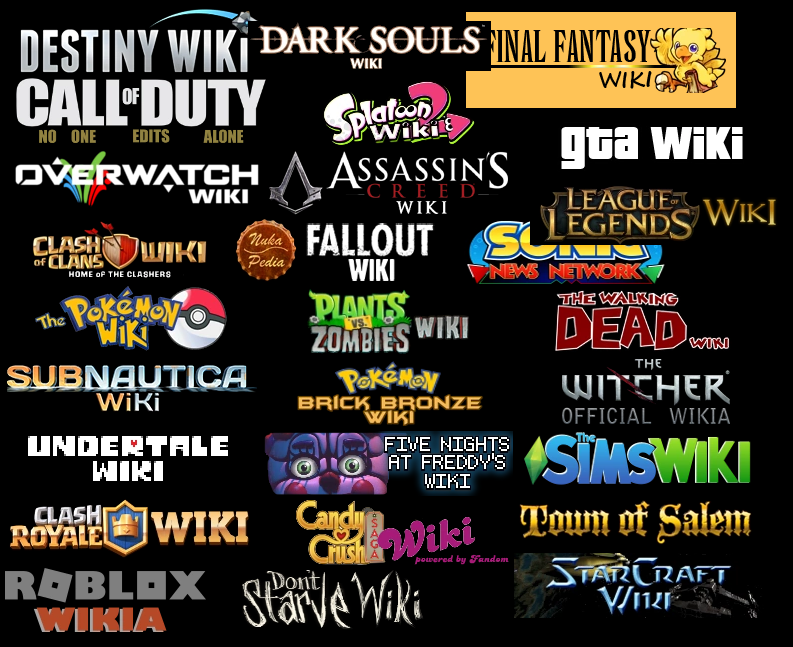 You guys know these were old logos when the current text didn't exist and this is exactly why we need to remove the text from ours, right? Maximus Gugu of Armadyl

Here's a possible suggestion, made to look more Runescapey

Suggestion - So here's another suggestion:

EDIT: Would look like this on a white bg (source editor)

Closed - There are too many suggestions all over the place in this thread, and there is no obvious consensus for anything. I will make a new thread at Forum:Header logo suggestions 2 outlining the proposed headers and the procedure moving forward. --LiquidTalk 22:34, August 28, 2017 (UTC)