From the RuneScape Wiki, the wiki for all things RuneScape
Jump to: navigation, search
Forums: Yew Grove > Another Slice of Wiki H.A.M.

Hi everyone. I'm here with a very important policy discussion that will settle a major conflict currently happening on the wiki. It impacts the very way we do things on the wiki, and it prevents us from being the most accurate wiki that we could be.

So without further a do, here it is. Do we use "A H.A.M. member" or "An H.A.M. member" on the wiki? Or to put it another way, how should we define the pronounciation of H.A.M.? Is it said as "aitch ay em" or as "ham"? We have even launched a Twitter poll for this issue, because it impacts the entire RuneScape community. This is bigger than anything we've ever had to deal with before, and we need the full co-operation of all Wikians to settle this once and for all.

Thank you for your attention to this important issue. I for one will be very happy when we've decided on a way forward for this. Honestly, I just feel like going back to FANDOM at this point.

Support "A Humans Against Monsters member" - We should use the full name instead of an acronym.

An H.A.M. member. Option E: Shut up Cook Me Plox - Before I destroy you all with facts and logic, let me make it clear that the decision is currently awaiting Mod Raven approval. Also, this is now wiki history.

One of the key topics of this debate is whether "H.A.M." is either an acronym of an initialism. I think both sides can agree however that it's an abbreviation for "Humans Against Monsters". But H.A.M. is an initialism. I believe this is Jagex's intended design of the cult: It's supposed to be an initialism that is officially pronounced as H.A.M (read: Aitch-Ay-Em, not Haitch-Ay-Em), but to the obvious reader - the player, and even me - it is read-out as ham (read: ham). Anyone who says it's an acronym is just wrong.

This is where the humour comes from: outside members of the cult see that they call themselves "a ham member" and laugh at their stupid name, but to the members, they are "H.A.M. members" (read: Aitch-Ay-Em members). They would call each other "Aitch-Ay-Em members". We are a Wiki - we know better. We know to call them their official terminology, and that is "an H.A.M. member".

Some of you may be going "But what about the in-game references?!?!?!???!?!? H.A.M. cloak clearly has the examine 'A H.A.M. cape'". For starters, Jagex are never consistent with their in-game terminology. Heck, they even say "cape" in the examine when it's a damn cloak. They don't even have the 'a' and the 'm' capitalised in the item name. I believe all in-game references of "A H.A.M." are just wrong.

Now, there's also the dots in the name. "H.A.M.", not "HAM". This strengthens my argument that Jagex's intention was for the name to be officially read-out as "Aitch-Ay-Am". Why else would the dots exist?

Finally, I actually don't give a fuck. Haidro 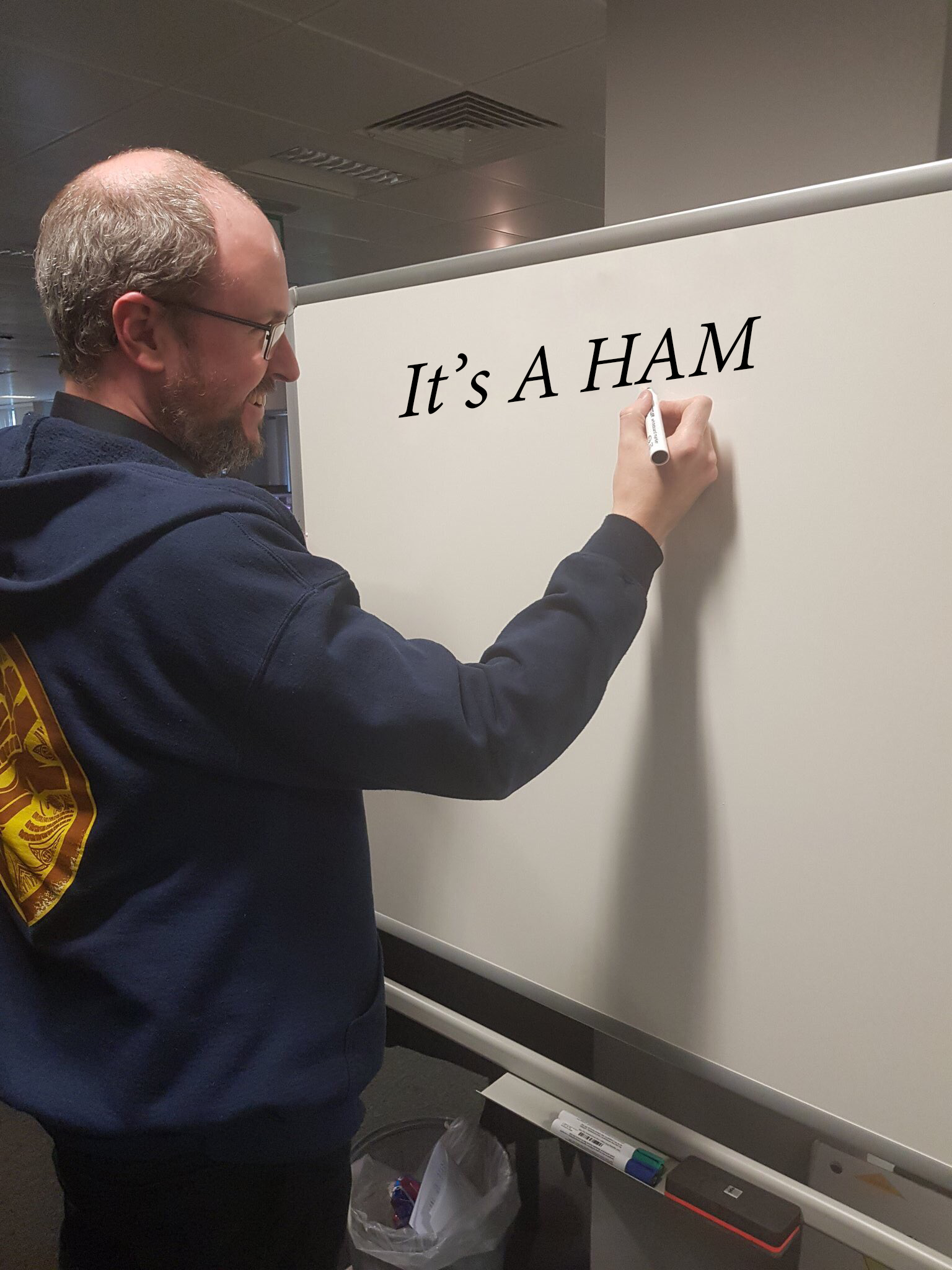 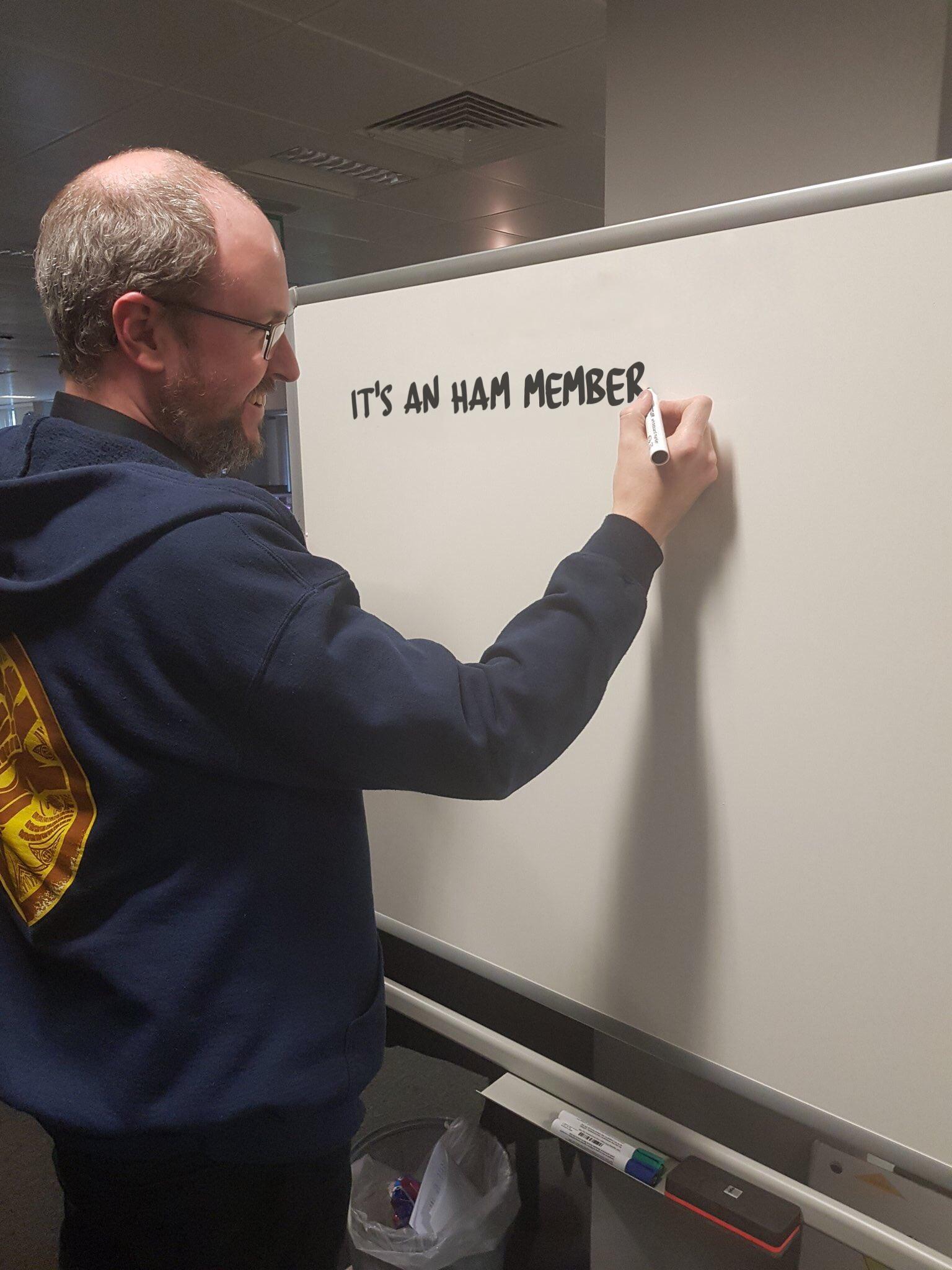 Seconded - because judging by the tone of the OP and a lot of the comments here, I feel like this is some weak form of intracommunity humour/banter/joke rather than a legitimate question to be discussed seriously...?? (inb4, #woosh over my head) If we are serious about this controversy, then I agree with Rawny because it's the only phrase suggested here that makes sense. *shrug* :S 185.169.42.131 04:35, 26 May 2019 (UTC)

Support "A H.A.M."(even though it's probably wrong) - I say ham, like the food. Because it is written H.A.M. and not HAM (although Jagex was originally inconsistent on some of the items IIRC and has been known to use both forms), it is probably an initialism and not an acronym so An H.A.M. would be more appropriate. I just don't like it and won't support it. #NotMyCultLeader. I feel like because ham (again like the food) is shorter and easier to say, most people probably do that. Just the same way most people are going to talk about "SCUBA diving" (SKOO-bah) and not "Ess See You Bee Ayy Diving" (which I understand sometimes Enn Ayy Ess Ayy astronauts do to train). Either way, my point here is, I like cheese on my ham sandwich, but this post has become far too cheesy. All in all, I'm not sure why it seems that everyone has a beef with H.A.M.

Support "A H.A.M." - an hero: the runescape wiki chronicles

Oppose both - I propose that we just avoid all phrasing that requires placing a/an before H.A.M.. For eg. A member of H.A.M., a cape of H.A.M., etc Superiosity the Wikian

Support "A H.A.M." or rephrasing to avoid issue - I've always read it as ham, but maybe rephrasing the sentences per Superiosity and Rawny is the way to go

Support "A H.A.M." - because so far all the in game references I've found/seen refer to it as "a H.A.M. [something/someone]."

Steamed H.A.M.s (Comment) -This is about the second or third dumbest thing I've seen this week. Also I don't care what JMods said, just go with what is used officially in game? Failing that, use what's most often in dialogue and text.

Comment - Since nobody has added this here yet, this is what Mod Raven's thoughts on this are:

This doesn't change the fact that it is referred to as "a H.A.M" in multiple places in-game. I think we should stick to the phrasing used in-game, despite what Raven's tweet might (or might not) tell us. jayden 11:04, 28 May 2019 (UTC)

We are a wiki - The H.A.M. organisation call themselves "an H.A.M. member", per Raven. It does not matter if a million people call a member "a ham member" because it is not officially correct - it is colloquial. As a Wiki, we do not use colloquialism. We reference their official name. Haidro

There's a difference between referencing their official name, and using it correctly in a sentence. Since it is widely accepted, especially in most places in-game, that it is pronounced like the food, we should be using "a H.A.M.". I don't think taking the opinion of a Jmod (not an official stance) is wise here when it directly contradicts the usage of the word in-game. jayden 13:51, 28 May 2019 (UTC)

These "most places in-game" are from non-HAM members calling people "a H.A.M member", which is correct, but not official. We do not use the usage that is "widely used in most places in-game", we use the term that is official (which just so happens most times that what is official IS what is used widely in the game, but that's not the case here). I have no idea where you got the assumption that Raven is speaking an opinion here, it seems pretty objective to me ("They would refer..."). Haidro

We live in a society - In-game it's most often written as a H.A.M. group. Besides, since it's an acronym that can be pronounced as a word rather than a string of letters (NATO, RAM, DARPA versus LCD, BBC, OECD), the former is preferred for ease of pronounciation which also supports a H.A.M. 5-x Talk 13:49, 28 May 2019 (UTC) 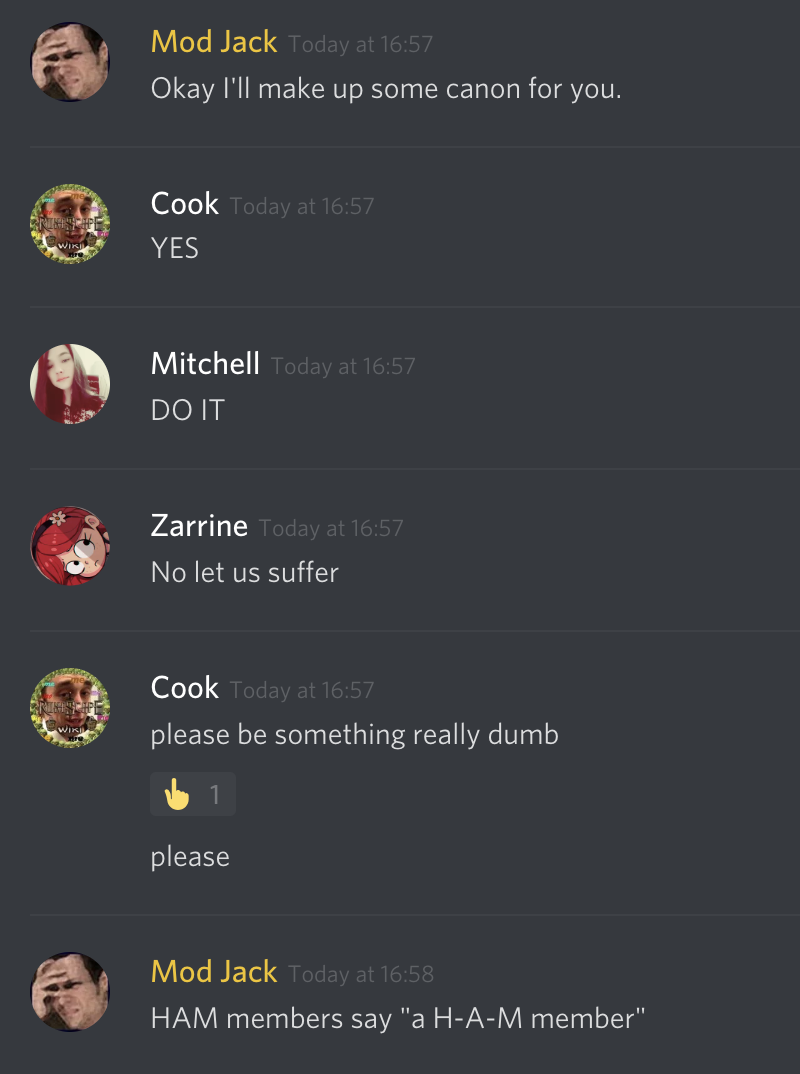 I withdraw all my points. You all win. Thank you Kelsey and Tzar <3. Haidro

Closed - "A H.A.M. member" is to be used throughout the wiki. User:Tzar/H.A.M.-Gate has been set up to document the war. Haidro