From the RuneScape Wiki, the wiki for all things RuneScape
Jump to: navigation, search
Forums: Yew Grove > Amending RS:PDDA for player made content

Throughout the past couple years of RuneScape, a lot of content has been added from player suggestion or design. From the now defunct RuneLabs to the most recent Combat Skill pets, I feel like there are some instances where a player's name should be mentioned.

Lets take the Wallace page for an example: 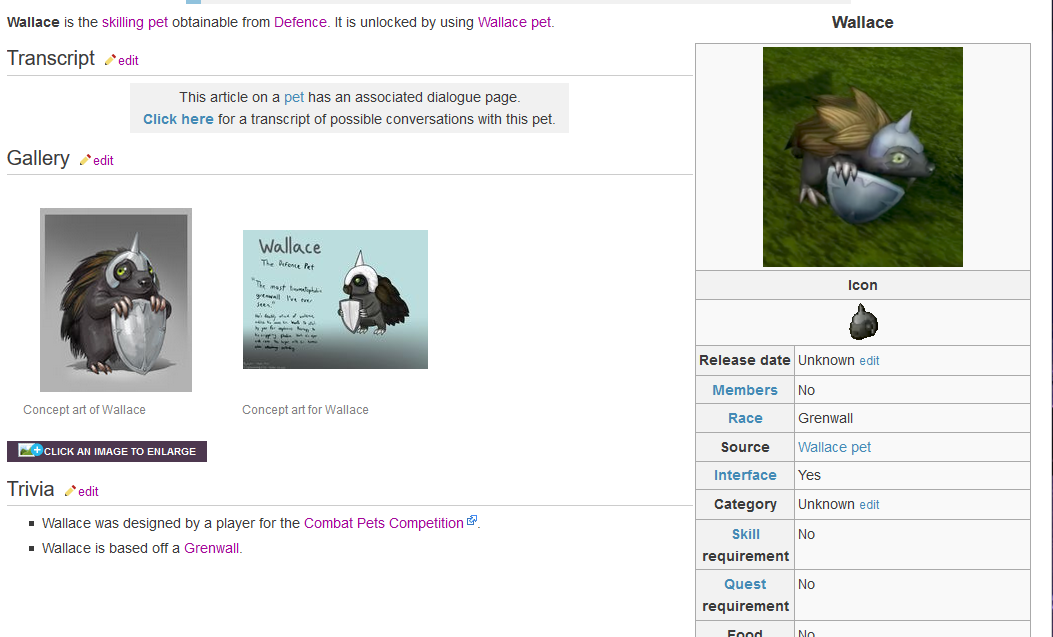 Currently, it says that it was "designed by a player for the Combat Skill Pets competition", with an external link to the relevant forum thread. I think this is an unnecessary step, as we're the self acclaimed "database for all things RuneScape", we should have no problems mentioning the player by name in the Trivia section.

Another example is The Light Within. A pretty large update, and it came from the player with the RSN: "Gaga Lady". The fact that we gloss over that fact is kind of disingenuous, in my opinion.

Essentially, amend RS:PDDA to allow the mention of the username of the relevant player (be it from Twitter, Reddit, RSN, Real name, etc) in the Trivia section. A couple stipulations should be taken into account though, such as if they change their username, that we use the one was referenced in the official news post, stream, or what have you.

TL;DR: Change RS:PDDA to allow username mentions when referring to player made/designed content or NPCs referring to a community figure of the same name (such as Prezleek and Portmaster Kags).

Support - Noting their name makes sense the same way that noting developers on quest pages makes sense. In some cases, their name is even already on the page. For example, with Wallace, they signed the initial concept art. -- F-Lambda (talk) 01:46, November 8, 2017 (UTC)

Comment - This was discussed on Forum:RS:PDDA and RuneLabs previously, where the result was no consensus. jayden 01:50, November 8, 2017 (UTC)

Support - I feel that if Jagex mentions a specific player by name, we should display that information as well. However we must be strict. Only players that Jagex specifically mentions can be listed on articles and it must be accompanied with a reference to where they were mentioned.

Comment - Why does it even matter which player it was though? Is it just a matter of crediting the person? Unless there's another reason I'm not thinking of I oppose this. bad_fetustalk 04:11, November 8, 2017 (UTC)

Comment - I feel it matters because Jagex is specifically naming them. So if it matters to Jagex, then it should be on the wiki. If Jagex feels it's important enough to name and credit a specific person in an official capacity, then the wiki should relay that information. Our articles are littered with instances of specifying the origin of updates. Our personal opinions on whether we feel it should be important is irrelevant. What is relevant is that it was important to Jagex.

Conversely I have no idea whatsoever why what Jagex thinks to be relevant is remotely important. We are an encyclopedia for all things RuneScape, not all things Jagex. If anything, whatever goes into an article should be completely independant to whatever folks at Jagex might be thinking. I don't see how you aren't advocating inconsistent information on articles based on a faulty notion. bad_fetustalk 21:09, November 9, 2017 (UTC)

Support - Per MAGE-KIL-R and also the name of the player will be the one at the time of the name being announced by Jagex as being the contributor to that piece of content (unless spelled incorrectly), but like with hiscore achievements, these should not be updated.

Support - the policy needs bringing up to date to account for Jagex involving and acknowledging players more in content. The names of players who are involved in developing updates/paid tribute to by Jagex is something the RuneScape community is interested in and we should document it. I think we should stick to mentioning the username (ideally RuneScape username, unless the person is only well known under a username on something different) at the time of content being released (i.e. not updating if the username is changed). Also use of an official Jagex source (as per RS:FUTURE) should be the preferred reference to support the trivia. If there isn't an official source then we would use something like a link to the player's account on social media: if possible I think we should avoid this as we can't take responsibility for the content on these sources/don't want it to feel like we are advertising people's social medias etc.

Support - As has been mentioned above, I support this but only when mentioning a name specifically credited/mentioned by Jagex via an official source. Whichever display name Jagex mentioned would be the only one we would credit, and not change this should the user change their name, and we also shouldn't credit a "real name" or anything other than what Jagex has already stated (for sake of privacy/security/verification/etc). As for a link, I feel like the name should only link to an official source (such as a newspost where Jagex announces the the players name as part of the update etc.) and NOT to a social media account, since the idea here is just to provide due credit (as we would for a jmod on a quest, etc) and not to try and advertise a player's social media.

Closed - RS:PDDA will be amended to allow mentioning players when Jagex officially acknowledges their role in inspiring or designing content. The player's username should not be updated from what is officially mentioned in Jagex's official source. --LiquidTalk 14:22, November 15, 2017 (UTC)