From the RuneScape Wiki, the wiki for all things RuneScape
Jump to: navigation, search
Forums: Yew Grove > A GP Measurement

As per my previous request here, I *sigh* once again propose this GP inflation index type thingy....which once again, I would be willing to write all the wiki source for, or if neseccary write in another language and run it locally on a regular basis and post results on a wiki page. Although I don't know any languages lol I'm sure a wiki fan would be happy to help? :)

I was hoping to be able to write it in wiki code which wouldn't take to long but first I have to figure out a method of doing so (i.e. "how do I get data from exactly six months ago?")

P.S. I AM learning JS but...lol...kinda dont have much have time anymore

I don't get how this differs from the Common Trade Index. It is impossible to measure the "value" of a RuneScape coin absolutely, just as it is impossible to measure a US dollar absolutely. Any unit of currency is worth exactly what it will buy, no more and no less. If a loaf of bread is worth 100 coins one week, and 200 coins the next, then the value is a coin has halved in that week (assuming that bread is no more or less scarce than it was last week). Then again, I'm no economist.  :-) So, really, what it this all about? Leevclarke talk

I was incredibly frustrated with the previous thread you made, and that you are moving to another thread is going to make it all that much harder. I want to help you out, but you need to explain in a little more detail what, exactly, you really want to accomplish here.

I don't think this takes Javascript to get this to work, and that really isn't the problem here. Please, correct me if I'm wrong, but it seems like you want an inflation index that is based on a market basket of goods, and has a "sliding window" based upon item prices from six months ago, or a year ago. Essentially, it would be the CTI index, but it would link in historical data too and not report the index itself but rather report supposed changes in that index over a longer period of time.

The trick here is indeed getting the historical data, and to be able to get that historical data automatically via some algorithm rather than having to access that data by hand.

I admit that there is some incredible information that we can mine from the GEMW data which would be useful if there were some way to access that information shy of a full database dump of this wiki. You could write a 'bot to pour though this historical data and automatically update some parameter that links to the CTI for this inflation metric. For instance:

Is this what you are looking for (or something similar)?

I had to hand code the starting index value, but yes it could be calculated and done. Otherwise, I don't know how else to help you out here. --Robert Horning 14:26, January 17, 2010 (UTC)

Yes, that's what I'm looking for, but I was thinking maybe I could build a bot to get the prices once a week and then store that data and then use it for the index. -- 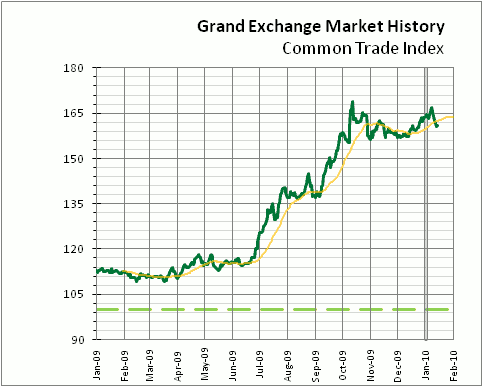 Hmmm, but also with different ratios and time marks --

Could you please just try and explain what you want, so that we can more easily understand it without needing to assume things that you might not mean.

Could you also try to explain why you think that it is necessary, and why the CTI is inadequate? Thanks, I'm a regular user and I approve this message.  TLUL Talk - Contribs 22:52, January 19, 2010 (UTC)

I suppose i could write a bot that request the values of about a thousand items and then compile them and post them on the wiki once a week?

My main concern for the CTI is price manipulation. A lot of people know about the index and use it. Low priced items on the index are commonly manipulated, reflecting in the CTI. Another issue with the CTI is that it compares gp to gp, rather than to a different quantity. Comparing gp to time is a much more reliable measure in the gaining and refining of raw materials. Example: when killing green dragons you gain 450k an hour, a month later you gain 550k an hour green dragons are therefor worth less. There are not that many activities for gaining raw materials, compiling all of them and running the data is not that hard. By using the raw material data already analyzed, refining costs can also be analized per time it takes to refine the raw materials. In this way gp gained by money-making activities shows a "CTI of moneymaking" which is a lot more relevant in real terms. Once speeds are aquired and combined with the CTI (now not encompassing raw materials and their derivaties but items dropped and discontinued items) a much more coherent view of the economic situation is made. If i were to suggest a unit, the unit average gp per hour for all collection of raw matierials and their refinement seems very compelling, and a number that is easy to compare to previous times, at any given time. This alo leaves profit rates for individual training techniques (such as fishing and woodcutting) as daily/weekly derivatives enhancing the quality of information on wikia. It also takes into account new ways of collecting and refining items and their impact on the economy as they are released.

The idea probably needs tweaking, but comparing time to gp, rather than the economy to itself is very interesting. Consider stock markets: all markets fluctuate so all numbers are relative, they therefore have to be constantly corrected based on relative gains etc. A Dow Jones of 10k points in 2010 compared to the same Dow in 1970 means nothing. here we are comparing the static hour of gameplay to a variable condition, giving meaningful results. --Tortilliachp 19:16, January 24, 2010 (UTC)

first, nice wall of text :), second i suppose compiling that data from what i take will not be that hard at all, i never thought about that but i do like the idea :) --

we all know a large wall of text harbouring little meaning, excessivly illustrious vocabulary, condecending and degradatory remarks about what "others" [implicity stupid oothers] have done previously as being inaccurate, entices those economically inclined ;) --Tortilliachp 16:41, January 27, 2010 (UTC)