From the RuneScape Wiki, the wiki for all things RuneScape
(Redirected from Forinthry dungeon)
Jump to: navigation, search
The Old School RuneScape Wiki also has an article on: osrsw:Forinthry Dungeon
This article is about the dungeon. For other uses, see Forinthry (disambiguation).

The Forinthry Dungeon is a very dangerous cave that ranges from level 18 to 32 of the Wilderness. It is a refuge for dragons, many kinds of demons and even the vicious revenants after being forced underground by adventurers in the year 169 of the Fifth Age. The dungeon is named after Forinthry, which is the original name for the Wilderness. The dungeon is extremely dangerous because not only are the revenants a lot more powerful than their combat level suggests, the cave is also a dangerous PvP area, so do not bring items you are not willing to lose.

The dungeon also plays a small role in the quest One of a Kind, where the player visits the green dragon chamber to investigate for mysterious markings. 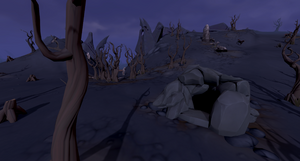 The entrance to the Forinthry Dungeon.

The dungeon has two entrances from the Wilderness. 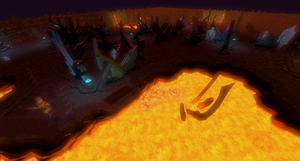 The revenants in the dungeon.

Revenants are slain monsters from the Third Age, and are the main attraction of the dungeon due to their valuable drops. All revenants can be found in the northeastern chamber, although the dragon will not appear on free worlds as it is a members only monster. The revenants were banished into the dungeon after players reclaimed the Wilderness from them in the Fifth Age. Although considerably weakened, they still pose a threat to passing players. 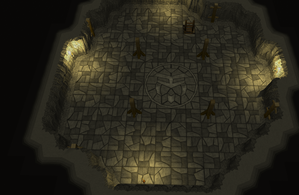 Surok's hideout area can be viewed at the north entrance of inside caves
Retrieved from ‘https://runescape.wiki/w/Forinthry_Dungeon?oldid=35477568’
Categories:
Hidden categories: