From the RuneScape Wiki, the wiki for all things RuneScape
Jump to: navigation, search
This article is about the enemy in Dishonour among Thieves. For the miniquest, see Foreshadowing. 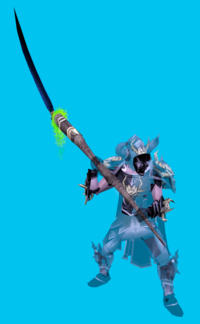 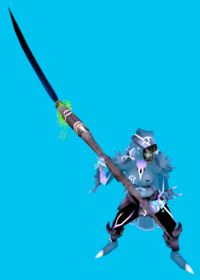 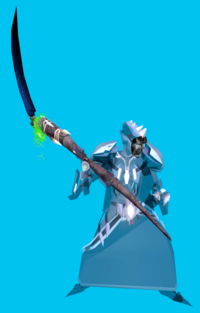 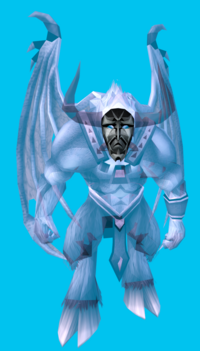 The Foreshadow (also known as the Inner demon) is a boss monster fought by the player near the end of the quest Dishonour among Thieves. It is a shadow duplicate of the player character's future self created by Sliske, and thus in-game, its name appears as whatever the player character is called. Its appearance is determined by whichever combat style a player uses, however it will always use magic and melee attacks. It is always wielding a noxious scythe regardless of armour worn, but is capable of using magic with it. Its stats and life points scale to the player's combat level.

The foreshadow is not a quest boss to be underestimated. It has a number of special attacks to attack the player with. The first special attack it may use on players is to bind them in a webbing, in a similar fashion to Araxxor. In the same sense, players must click rapidly somewhere else along the screen, or they will take rapid hits of 600 damage. The foreshadow may also pull the player close to the Stone of Jas, which will then emit a shadow effect near it, which players should avoid by running away from the Stone and out of the way of the stairs to avoid damage. If players fail to avoid this, they will take 50% of their life points in damage. Finally, the foreshadow will shroud the arena in darkness, dealing rapid hits of 750 to the player if they stay out of its melee range. 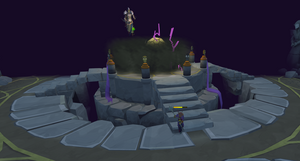 The foreshadow pulling a player close to the Stone

When players take the foreshadow to 40% of its total health, it will transform into its "inner demon" phase and take on the guise of a demon. During this transformation phase, players should keep their distance, as it will use a small area-of-effect attack that can do approximate 2500 damage. Once the foreshadow has started this phase, it will cease to use its previous special attacks, but will increase its attack speed, and will instead spawn dark portals, which will rapidly heal the foreshadow until they are destroyed. Walking away from his transformed form while dark portals are active will cause the room to go dark as well, and deal rapid damage (600 per second) until the dark portals are destroyed or if you remain close enough to it.