From the RuneScape Wiki, the wiki for all things RuneScape
Jump to: navigation, search
Flying Goblin Hat? (edit)

The Flying Goblin Hat is a cosmetic hat obtainable from various events and promotions.

It was originally obtainable from the Squeal of Fortune. However, since the Squeal of Fortune's removal, it was made available from Treasure Hunter during the Blast from the Past Treasure Hunter promotion on 27 February 2014 through 3 March 2014, with increased chances of winning the hat on 1 March 2014. It is also obtainable through the recurring Parcels from the Hedge events. 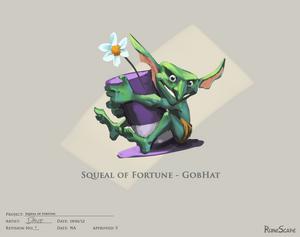