From the RuneScape Wiki, the wiki for all things RuneScape
Jump to: navigation, search
The Old School RuneScape Wiki also has an article on: osrsw:Flax field 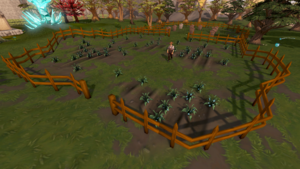 A flax field is a location where many flax plants are located together. Each of these spots has a random number of flax, and a flax spot disappears when all the flax in that spot is picked. They reappear later after approximately 5 seconds in the same spot. They can be picked, granting 1 Farming experience, and may then be spun into bowstrings. This gives 15 Crafting experience.

Currently, there are seven flax fields located in Gielinor.

There is a small flax field in Taverley, north of the lodestone. It is located near a Compost Bin, making it a good source for compostable material. This is the only flax field available in free-to-play.

There is a flax field south of Seers' Village and west of Catherby, next to the beehive field. It is a convenient place to pick flax as there is a spinning wheel in a building to the west. It is a popular area with players picking flax as an early temporary moneymaker as flax can sell for about 123 coins each. After completing the Seers' Village achievements, Geoffrey will give out a set amount of flax daily, depending upon the level of Seer's headband owned.

There is a flax field in Lleyta in Isafdar. It is located south of the Lleytan bank. It contains less flax but is considerably closer to a bank than most other fields. Mourning's End Part I is required to gain access to this field.

A third flax field that can be found in the south-east region of the Tree Gnome Stronghold, it contains lots of flax spread throughout the area. Spinning wheels can be found nearby. A bank can also be found north-west of the area.

Some flax herbs can be found on Lunar Island, it contains a low amount of flax, and it is spread out over the south part of the island, on the way from the city to the Astral Altar.

Some flax plants can be found south of Rellekka, near the Fenris wolves.

A sixth flax field can be found in the Cadarn Clan section of Prifddinas, just north of the max guild. It is situated directly west of a spinning wheel, making it a good place to spin bowstrings.