From the RuneScape Wiki, the wiki for all things RuneScape
Jump to navigation Jump to search
This article is about the minigame. For the music track, see Flash Factory.

The Flash Powder Factory is an Agility, Thieving, and Herblore minigame that replaced the Rogues' Den minigame.

After the Imperial Guard took notice of the old Rogues' Den, Brian O'Richard shut down his maze and opened the doors to his Flash Powder Factory instead. Inside, players can operate the factory while dodging obstacles and the sneaky fingers of other players.

Some Thieving experience can be gained from pickpocketing other players, as well as Herblore experience from mixing ingredients at the Factory. Pieces of the old Rogues' Den rewards can also be found lying around.

Although the format of this minigame is similar to that of the Agility Arena, it is not an actual Agility course. Agility experience is not gained for traversing obstacles in the Factory. Thus, the surefooted/greater surefooted auras cannot be used here to prevent failure like at other courses.

All games at the factory take place on an instance shard world, accessible from any server but actually taking place on another server.

The Flash Powder Factory can be found inside the Rogues' Den, which is below The Pick and Lute bar in Taverley. Enter by the trap door in the north-east corner of the bar.

Games are initiated by speaking to Brian O'Richard. Players are teleported to an instanced shard world, similar to Clan Citadels. 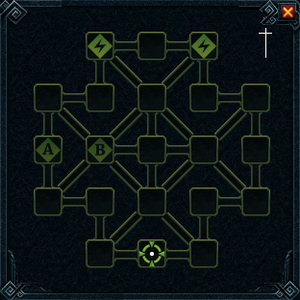 The aim of the game is to make flash powder. The first step is to collect the two reagents known simply as "A" and "B". These can be obtained from the reagent machines A and B, marked with blue and yellow arrows on the minimap, respectively. These can also be located by checking the map of the Factory, which replaces the usual world map during the game. Each game takes 15 minutes or until the player uses up all of their catalytic powder. Wearing a Factory top or Rogue top will grant an extra two minutes to the time limit per game.

Once both the reagents have been obtained, they must be taken with catalytic powder to one of the four mixer machines, marked by the dark red arrows on the map, to make the flash powder and gain points. This uses a dose of catalytic powder. Players start with 6 catalytic powder, although more can be collected from the catalyst machine (hopper) in the centre of the arena or found in the fallen rubble.

A minimum of 100 points will be gained for each batch of flash powder made. Additional points can be obtained when making powder by having a bonus, provided by certain factors:

The bonus stacks additively. The individual bonuses will be added together to form the actual bonus.

Taking advantage of all of the bonuses, it's possible to gain upwards of 150 points for each batch of flash powder made.

To navigate the map, players must pass agility obstacles that separate each room. Some corridors, namely the diagonals and the ones coming from the centre room, also have pressure doors at each end of them, which are sometimes locked, making navigation more difficult. If a player is trapped in a corridor by two locked doors, they have a few seconds to step through one of the doors before they get teleported to a random corner of the arena.

Most of the doors may be opened by operating the nearby call buttons. When the buttons are blue, they can be activated, and they will open the passageway next to them while closing others that lead to the same room. All the buttons in that room will then become red, and cannot be activated until about 20 seconds later when they reset to blue.

The doors leading to the catalyst machine in the middle of the factory work differently. Instead of being affected by the call buttons, they change automatically every 20 seconds. At any given time, two of them are open and two are closed. The open doors cycle in a clockwise direction, so each individual door stays open for 40 seconds at a time and then stays closed for 40 seconds. 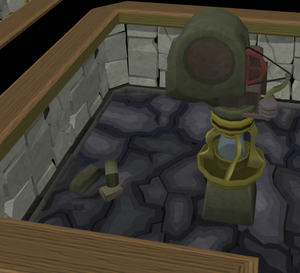 While traversing through obstacles, players may occasionally encounter fallen rubble. The rubble looks like a pile of grey bricks and might be difficult to spot. Searching these can yield pieces of rogue armour, catalytic powder, sets of apparatus, or flash powder (an average batch, a rather decent batch, or a very nice batch). It is also possible to find nothing (useless rock). Receiving a piece of rogue armour is considerably rare.

Within the Factory the player raises their game score by making or finding flash powder. On exiting the factory, the game score is converted to reward points called "Brian points". Brian points can be used to buy rewards including Thieving experience, Agility experience, and pieces of the Factory outfit. Each piece of the Factory outfit offers benefits within the Flash Powder Factory; in addition, wearing any three or all five pieces of the full outfit outside the game offers Herblore benefits.

Brian points are calculated by multiplying the player's score by 0.1428 (1/7th of the score) and rounding down to the nearest whole number. For example, a score of 1,000 would award

points. However, a maximum of 180 Brian points can be obtained per game. Thus, scoring above 1,260 does not improve the end reward any further. A Quick Chat phrase can be used to check your total Brian points, or they may be checked in the "minigames" section of the currency pouch.

Brian points can be used to buy rewards from Brian O'Richard. The rewards that can be bought are as follows: