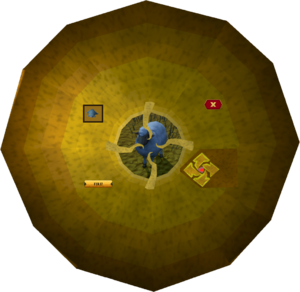 To hit a specific object, aim at the square it's on.

The fixed device is a gnomish contraption used in the Mourning's End Part I quest to apply dye to Farmer Brumty's sheep. It requires level 60 Ranged to wield. It uses dyed toads as ammo, which players make by filling Ogre bellows with any dye (except orange, pink and purple), then using the bellows on a Swamp toad. Only one toad may be placed in the device at a time, and the device can only be wielded when filled with ammo. When equipped, it can be fired by right clicking and selecting "Fire" from the equipment menu.

After the quest is complete, players can still use the fixed device as usual, firing it at anyone and anything they wish. Players wishing to use this item for an extended amount of time can collect as many dyed toads as they want. It is also easier to use the device if a player has two of them: one to wield and one to keep in the inventory. This makes things easier because using a toad on the device in the player's inventory will also load the device being wielded, allowing it to be fired over and over without taking it off after each shot.

If lost, players can re-obtain a broken device and ask the gnome to fix it. You will need more leather, toad crunchies and another magic log. He will still do this after the quest is complete until Plague's End is started.