From the RuneScape Wiki, the wiki for all things RuneScape
Jump to navigation Jump to search
This article is about the minigame. For the legendary object sometimes known as the Fist of Guthix, see Stone of Jas.

Fist of Guthix is a strategic combat minigame. The game employs tactics and strategy, offering a substantial range of rewards to players. To begin playing Fist of Guthix, players must first speak to Fiara or Coulson.

Fist of Guthix is one of the few minigames which you can have a highscore rank in. The rating needed to be on the minigame high scores is 500. As of 14 October, 2017, there are 190,395 players ranked.

The entrance to Fist of Guthix is located in the Gamers' grotto, east of the Falador lodestone. 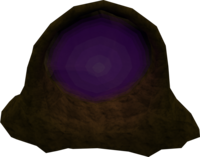 A ring of duelling has a teleport that leads directly to the arena. The games necklace has a teleport to the Gamers' Grotto. From there, the southern portal will take you to the Fist of Guthix arena. 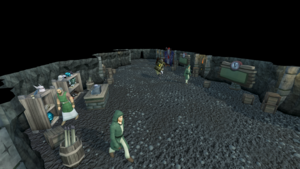 After players enter the cave, they enter the main lobby. Here, the players can talk to Fiara or Coulson, depending upon the outcome of The World Wakes, to learn the rules of the game, access their bank, talk to Reggie who runs the shop, talk to some of the druids like Alran, Getorix and Pontimer to learn more about the history of this place and finally enter the waiting room for the minigame. New players must talk to Fiara first before they are allowed to play the game. She is a giant earwig like creature, a Guardian of Guthix.

At the corner of the waiting lobby, there is an entrance that players can see but cannot click on. The examine text is "I need an opponent first." This is probably the physical doorway that your player goes through when they are paired up in order to access the arena.

Players can not enter the lobby during a System update.

The minigame consists of two rounds and is 1 vs 1. In each round, one player is classified as the "hunted," and the other player is classified as the "hunter." In the first round, the roles are determined randomly. In the second round, the roles are swapped and all stats are restored. Therefore both players will have a chance to play each role; afterwards a winner is determined based upon number of charges you were able to collect during your turn as "hunted."

The following items are supplied to each player when a player goes into the waiting area, and taken away if they leave it: 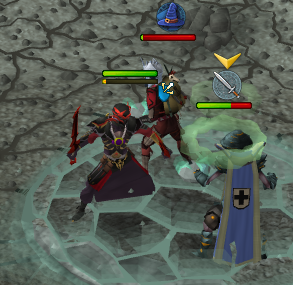 A player in the hunter role

As the hunter, players must hunt down the other player and kill them as fast as possible in order to prevent them from collecting charges. However, especially when the Minigame Spotlight is active on Fist of Guthix, many players choose to maximise their Thaler by not attacking the player they are hunting, thus maximizing time in the game and allowing for a more AFK experience. Hunters can use melee, ranged, or magic to attack their opponent. Hunters typically use a combination of attack styles in order to deal maximum damage against their opponent, and counteract any prayers or armour.

Note that the following spells cannot be used in this minigame because they disrupt the strict 1 vs 1 gameplay: 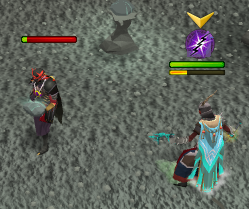 A hunted player runs from their hunter

Being the hunted player is usually considered much more challenging, and is the only role in which the player can collect charges. The basic objective is to gather as many charges from the "Fist of Guthix", a large energy field in the centre of the arena, as possible before time runs out or the player dies.

To gather charges, the player must first pick up a stone of power from a stone dispenser, and then wield the stone to gather charges, the maximum number of charges being 5000. The stone is two-handed, and can only gather charges when it is wielded (not just in the inventory), meaning that the hunted player will be unable to fight back whilst wielding the Stone. Players can gather charges anywhere in the arena, although the closer to the centre (the "Fist of Guthix") they are, the faster they will gather charges. Players wielding the stone will not gain charges individually, but will instead gain a number of them every 3 seconds. The hunted can attack the hunter with any combat style. If the hunted kills the hunter, the hunter respawns in a random location.

Hunted players do have an advantage, however, in that they can use the teleport houses located around the centre. Hunters cannot access these houses, nor see players inside them. Automatic lock-on is also cancelled, so the hunted player is safe while inside them. There are portals inside to teleport the player to other houses circled around the centre. When the player teleports they will lose 20 charges. Note that the player will have some life points drained when they enter a house, and often take some damage while they are in the house. Players cannot gather any charges while in the house. If a player has recently exited a teleport house, they will not be able to enter another house again for about 20 seconds. A hunted player with less than 20 charges cannot use the portals in the houses. When teleporting there is a chance that the teleport will fail, returning you near the house or at the centre of the arena.

A round will end under any of the following circumstances: 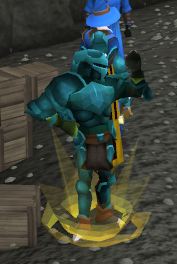 The winning stance animation that appears after you have completed a game.

When the first round ends, both players will swap roles, stat effects will be reset, and the second round will begin. After the second round, the player with the most energy charges (or the only player left in the event of a log out or forfeit) wins.

At the end of the game, most of the arrows on the ground will be returned to their original owners, so there is no need to pick them up while in the game.

The fighting area is composed of a large circular area, with teleport houses and ruins surrounding the centre. At the edges of the arena, there are stone dispensers for hunted players to grab a stone of power. The stone must be equipped to gather charges. The teleport houses near the centre, or Fist, of the arena, protect the hunted when entered. It makes the hunted invisible to everyone else and it disables any "locking on" effects but also drains the hunted's life points by 10% initially, and causing the hunted's life points to decrease every five seconds. There is also a portal in these houses, but it takes 20 charges to activate, and has about a 90% chance of teleporting you to another house. The other 10% of the time, a player will be teleported to the outside ground in between houses. Any player standing on the Fist of Guthix will have their run energy rapidly restored. The centre also provides a good hiding place, as long as you stand atop other players. Although your opponent will see a yellow indicator above you, the combination of lag and necessity of right-clicking often slows the hunter down somewhat. The stone of power will gain faster and more charges the closer it is brought to the centre.

At the end of a match, players are rewarded as follows.

Used to keep track of your progress on the high score tables. Rating goes up or down based on how many charges by which the game was won or lost.

Currency for Reggie's shop, which can be used to buy the items listed below.

Tie: If both players get the same amount of charges, both lose and receive 1-3 tokens. This is designed to thwart cooperative play.

Forfeit: Players who forfeit by leaving the game early are flagged as a forfeiter, receive 0 tokens from that game, and receive fewer tokens from the next game. In addition, they must wait 2 minutes before they can join another game.

Some players choose to make Fist of Guthix a money-making option by purchasing tradeable rewards from Reggie, having him uncharge them (only uncharged items are tradeable), then selling at the Grand Exchange. The effectiveness of this is determined by the rate at which one can acquire tokens.

After approximately 150 wins, players have a chance to be randomly rewarded with their choice of Battle-mage gloves, Trickster gloves, or Vanguard gloves. 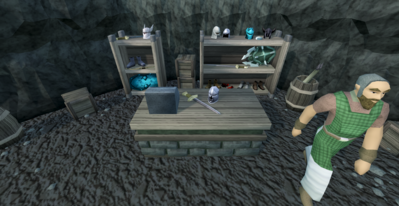 Inside the main lobby, Reggie owns a shop where you can spend the Fist of Guthix tokens you have earned. The items here consist of various types of gloves that can increase your experience while training certain skills, magical robes which may supply certain runes for you or increase the potency of certain spells, and special types of armour that can give you strength or ranging bonuses.

All items listed here will degrade over time (with the exception of gloves). The items will also be untradeable until the item has completely degraded. To repair/recharge any degraded item, use the item with the shop-keeper Reggie, and he will recharge the item for you a specific cost of tokens. To completely degrade an item, allowing you to trade it, simply use the item with Reggie and he will deplete the item for free. Rather than degrading, gloves will simply crumble into dust after 1,000 uses. There is no way to repair these gloves — a new pair must be bought from Reggie after you have lost the old pair.

Tune that plays when you win a game

Tune that plays when you lose a game